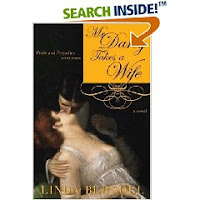 I read this book with a little bit of skepticism, since I've mentioned recently that I'm not a fan of Pride and Prejudice spin-offs. After all, how could anything ever match up? However, I'm interested in how other people think the story should continue (if at all), and so I picked this book up. There were many things that were wrong with this book, not the least of which was the stilted language the author used. Believe me, this is even worse than Mr. Darcy's Daughters.

Aside from the sexual exploits of Mr. and Mrs. Darcy, I really couldn't find any major flaws in the plot- probably the only redeeming feature of this book. The author, it seems, is a great writer. Mrs. Bardoll could have written such a great book; but only if she hadn't chosen to write a "sequel" to a wonderful, much-loved classic!

The plot concerns many things: the parental identity of a groom who lives on the Pemberly estate; the literary aspersions of Georgiana Darcy; the marital felicity of Jane and Charles Bingly (which is not as happy as one would have supposed); the marital felicity of George and Lydia Wickham (which, to no one's surprise, is nonexistant); and the doings of a roguish footman who wiggles his way into the middle of the Darcy family. Mr. Collins makes an appearance here, and he is much more hapless than Jane Austen depicted him; there's one rather hilarious scene in which he falls off a horse.

Anyone who has read Pride and Prejudice several, or many times, will have prejudices of what the characters should be like. Mrs. Bardoll's opinion is only one of many. But Mrs. Bardoll bases her novel on the 1995 BBC adaptation of the book, instead of the book itself; and therin lies her problem. The author is too concerned with an image she gained from watching the miniseries, the actors involved, etc. The author also claims that she did years of research for this book; as a result, her book is convoluted with references to historical issues and doesn't focus upon what Jane Austen would have focused upon.

Danielle said…
I can't do sequels to famous books either. And I can't imagine romantic liaisons between the Darcys either. Not to be too prim and proper, but it's just a little too strange for me.
August 19, 2008 at 5:03 PM

Anonymous said…
I've looked at these Jane Austen sequels, but I've never really felt drawn to read them and now I'm glad. I haven't read any of the sequels to Gone with the Wind, either. If the original author didn't write them, I'm not interested. I prefer my own imagination.
August 19, 2008 at 7:45 PM

Anonymous said…
I don't really read Jane sequels because they are just so different from the magic that I love from her books, but I read this about 4 or 5 years ago. I worked at a magazine publishing company and they sent a galley over. The sex was little over the top, but I thought the plots were plausible and interesting if a little melodramatic at times. In the end the sheer number of plots got to me, and it got a little long but it wasn't as bad as I expected. Of course I never read another sequel either.
August 19, 2008 at 11:59 PM

Anna Claire said…
I'm with Nicole. It seems like Berdoll tried to do too much with this book--too many subplots. And it was weird that about a gajillion sex scenes are in the first part, and then practically none in the second. I'm not saying I want more sex scenes in the book, but you'd think if she was going to do that many, she'd have spaced them out a bit.

Oh, and she was unfair to Jane and Bingley. There, I said it.

For those who don't like sequels to famous books (me either) but want another Austen fix, check out Austenland. It's bizarre but so, so funny and true.
August 20, 2008 at 11:21 AM

Anonymous said…
I just finished Pride and Prejudice and am very happy with the consummation. Why should anyone bother with spin-off? Conjugal activity? *This* is scary. I have stumbled upon a few P&P sequels but to be honest not keen on them.