Review: East of the Sun, by Julia Gregson 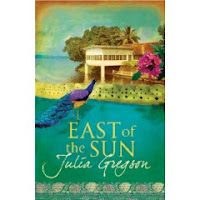 I picked up East of the Sun from Amazon UK on a sort of blind buy. It was recommended to me because I purchased The Forgotten Garden. Well, one thing turned into another late one night... and all of a sudden I found myself clicking “proceed to checkout.” You know how it is.

I actually rather glad I made this impulse purchase. Set in 1928 and 1929, East of the Sun is the story of three women who go to India: Rose, a young woman going to get married; her best friend Tor, going to be her bridesmaid and hopeful that she’ll find a husband herself; and Viva, a young woman accompanying them on their voyage in order to reclaim a trunk that once belonged to her parents. Also in her care is Guy Glover, an unstable sixteen-year-old, who’s just been kicked out of boarding school and who quickly becomes a risk to Viva and her charges.

Once the women get to India, nothing is what they expected it to be. Rose’s marriage is hardly a bed of roses; and, although the number of English men in India overwhelms the number of women, Tor can’t quite get her act together in order to find a husband. As for Viva, her plans to pick up her trunk and leave India derail pretty quickly as Guy Glover's antics get out of hand.

The novel is not so much about India as it is about the British in India and the so-called “fishing fleet” of young women who went there to find husbands. The first third of the book is devoted to the voyage out to India (in first class) on the Kaiser-i-Hind, and I thought that part of the book was particularly engaging. The characters are all finely drawn, and I found myself rooting for each of them. It’s a very lively and dramatic book, and I couldn’t put it down. The story mostly belongs to Viva, but my favorite character above all was Tor—her personality was much more endearing than that of the other characters.’ The only setback to this novel is the Guy Glover storyline, which kind of detracts from the story. In all, however, Julia Gregson does a wonderful job of capturing the last days of British colonization in India with a fine eye for detail. So far, this book has done well in the UK, with, apparently, 300,000 copies printed as of August 4.

Lezlie said…
Isn't it fun when a completely unplanned read turns out to be so good? I have found some really amazing books that way, too!

Marg said…
I recently borrowed this from the library. I am looking forward to reading it, as I love book with an Indian setting.
September 9, 2008 at 6:57 PM

Iliana said…
Ah, I love it when an impulse book purchase ends up being such a delight. This sounds like a good read.
September 9, 2008 at 8:18 PM

Danielle said…
I think we have really similar reading (and buying) tastes--I would also be very tempted to get that book on description alone. I might just have to order it myself!
September 9, 2008 at 11:14 PM

Unknown said…
It would be so easy to mistake this book for one of those others, lush, rich people having dramas played out against exotic backgrounds. This one was so much more. It was people of all economic groupings, for a start, and it wasn’t just us, it was the Indians, shown in so many different ways. Everyone commented on everyone else, rightly, wrongly. I understood so much more about the cultures of us in the ‘20s, off on ‘the fishing fleet’ to find husbands; and of what India was like at the time – Gandhi and times changing, us changing [or not in the case of some], the Indians changing towards us, in so many ways large and small. There is so much detailed historical analysis and research clearly done in the writing of this book, and all doled out during the story, so that its so much easier to understand this complicated period, and from so many different points of view.

Characters are wonderful – Viva, the bluestocking author, who wants to learn all about India and be a writer – her road is rough, and all her mysteries come to haunt her until she is healed at the end. Rose who comes to India for the equivalent of an arranged marriage, neither she nor her prospective husband Jack truly understanding that their lives before and after marriage will be utterly different; there was no getting to know each other, no blending…they cut each other’s lives in half and bled through the book until a sort of truce was reached, unhappy but its where they’re left. psicologo online Tor, who is desperate to get away from her controlling mother, and stay in India after accompanying Rose out. She is full of life and enthusiasm and ends up happy, for which I am so glad, with the wonderful boyish Toby, who understood so much – there’s a very affecting story about a small bird he tells.
November 18, 2016 at 4:09 PM

May 15, 2008
Forever Amber takes place in the 1660s, immediately follwing Charles II's ("the Merry Monarch") return of the Stuarts to the English throne. The book features Amber St. Claire, a young woman who starts out as a sixteen-year-old country girl, naieve to the workings of the world. She immediately meets Bruce Carlton, a dashing young Cavalier, with whom she has a passionate love affair in choppy intervals throughout the book. They have two children together, but Bruce won't marry her for the reason he tells his friend Lord Almsbury: that Amber just isn't the kind of woman one marries. Upon following Bruce to London, he goes to Virginia, leaving her to fend for herself. What follows is a series of affairs and four marriages, with Bruce coming back from America now and then. Amber's marriages are imprudent: her first husband is a gambler, her second is an old dotard, her third locks her up in the house for days and won't let her out; and the last is a fop wh
2 comments
Read more

May 25, 2012
Pages: 294 Original date of publication: 1963 My edition: 2010 (Harper Perennial) Why I decided to read: How I acquired my copy: Barnes and Noble, Phoenix, January 2011 A Tree Grows in Brooklyn is one of my all-time favorite books and I’ve read it, oh, half a dozen times, so I was interested to see how Joy in the Morning would compare. Set in the late 1920s, Joy in the Morning begins when Annie, aged 18, comes to a small Midwestern college town where her fiancée, Carl, is in law school. The novel opens with their marriage in the county courthouse, and follows the couple through their first year or so of marriage. It’s a struggle, because Carl and Annie are basically children themselves, for all the ways in which Carl tries to appear more adult-like. Annie is endearing; she’s ignorant but a voracious reader, reading everything from Babbitt to War and Peace. Betty Smith’s novels are pretty autobiographical; Joy in the Morning is (unofficially) a kind of sequel to A Tree Grows i
5 comments
Read more

October 19, 2010
Pages: 254 Original date of publication: 1964 My edition: 1964 (William Morrow) Why I decided to read: it was 90 degrees outside at the time and I decided it was time to read another book by a favorite author How I acquired my copy: from Susanna Kearsley, December 2009 Sometimes, whether or not I decide to read a book depends on the weather. Mary Stewart’s books are best read on either very hot or very cold days; and since it was 90 degrees out one weekend a couple of weeks ago, I decided that this one would be perfect. And it was. This Rough Magic takes its title from The Tempest , a play from which this novel takes off. Lucy Waring is a struggling actress who comes to visit her sister on Corfu. One of her neighbors is a renowned actor who’s taken a bit of a sabbatical and his son, a musician with whom Lucy comes to blows at first. This Rough Magic is vintage Mary Stewart, with a murder or two, a mystery, romance, suspense, and lots of magic thrown in. Lucy
4 comments
Read more