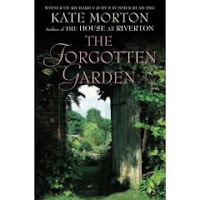 The Forgotten Garden, the follow-up to The House at Riverton, is a muti-layered novel with complicated characters and a highly intriguing storyline. The story jumps back and forth in time, but rarely is the reader confused as to what's going on. As I mentioned here, this novel won't be out in the US until April 2009, but of course that didn't stop me from running over to Amazon Uk to purchase a copy of The Forgotten Garden! Let me just say that I wasn't disappointed.

The book opens in1913, when a young girl with no name is found on a quayside in Australia. She doesn't remember anything about herself, and all she carries with her is a white suitcase containing, among other personal items, a book of fairytales penned by a woman the girl calls the Authoress.

In 1975, the girl, now a woman called Nell, goes back to England, where she attempts to find answers to questions about her identity. Her travels lead her to Blackhurst Manor, delving deep into the Mountrachet family's secrets and purchasing a cottage on the Blackhurst property. But before she can solve the mystery of her past, Nell's flaky daughter Lesley shows up, dumping her granddaughter Cassandra on her doorstep--permanently.

In 2005, after Nell's death, Cassandra inherits the cottage and tries to answer the questions her grandmother raised. The stories of these two women are complemented by that of Eliza Makepeace, who grew up in the slums of London around the turn of the nineteenth century, and her cousin, the genteel Rose Mountrachet.

This is clearly a novel written by a woman, for women, about women; the male characters take a backseat to the female ones, sometimes becoming unlikeable. In fact, Linus Mountrachet is downright creepy, and Nathaniel West is a bit of a cad. The novel is punctuated here and there with some of Eliza's short stories, which provide wonderful little interludes, kind of like AS Byatt's Possession, in a way. Possession, mixed with a little bit of The Secret Garden. We're even introduced to Frances Hodgeson Burnett, suggesting that she might have received inspiration for The Secret Garden from Eliza and Rose's garden.

What I loved about this atmospheric, fairytale-like novel was that Morton tells the story of these different, but connected, women, but she doesn't give everything up right away. I tried to guess at the mystery many times, but ultimately my guesses were never correct. The characters are well developed, and although it takes a little while to get into the story, this is an excellent novel, filled with old houses and hidden gardens with secrets and surprises. It's also a novel about foreshadowing; even Cassandra's name suggests someone who can foretell the future. Aside from some too-fortuitous chances (for example, Eliza is rescued from poverty at the exact moment that she's about to be sent off to the workhouse), I found it really, really difficult to put this novel down, and only finished it reluctantly.

Also reviewed by: Between the Covers, Things Mean A Lot, A Life in Books

Danielle said…
I wish I could read as fast as you do! I'm looking forward to this one. Have you heard of The Book Depository? They offer free shipping from the UK to the US--no matter how many books you buy. I'm addicted and rarely order anything from Amazon UK anymore. They are also pretty fast in shippng, too. (Can you tell I use them a lot?).
July 18, 2008 at 3:17 PM

Marg said…
I still haven't read House at Riverton either, but now I want to, if only so I can get to this one!

Literary Feline said…
I haven't yet read House at Riverton either, but it's in my TBR collection waiting to be read. This one sounds really good as well.