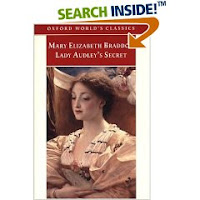 In Lady Audley’s Secret, Sir Michael Audley marries Lucy Graham, a governess. She’s a fragile-looking young woman of about 20 or so, whose outside appearance belies the deep, dark secret she’ll do anything to protect. But when a young man named George Talboys goes missing, his friend Robert Audley steps in and resolves to figure out what happened to him. Robert, a dissolute barrister, has a strong suspicion that his step-aunt is connected to his friend's disappearance.

I’m not going to give away (much) here, because it would spoil virtually the whole book and a lot of the enjoyment that goes with this reading experience, but suffice it to say that this novel was one of the great works of Victorian sensationalist novels that were published in the 1860s. It was sensationalist because it took the ideals of Victorian family-hood and turned them upside-down: it was nearly inconceivable that a woman could be capable of the acts that Lady Audley perpetrates here. Even today, this novel is still fascinating, filled with ghosts and murder and arson and bigamy. Braddon displays a wide range of outside knowledge, from Classical literature to literature of the time (she even mentions Wilkie Collins, to whose The Woman in White this novel is probably indebted), to history (the English Civil War), current events (the US Civil War), and beyond.

The author tends to be melodramatic, which turned me off a bit, and her writing style just isn’t that good (Braddon tended to write in fragmented sentences). But the story itself sucked me in, and after reading a few pages, I knew that I just had to read the rest. Its definitely true that Braddon is the master of writing plot, and everything ties together perfectly. While considered trashy in the 1860s, the novel contains a strong statement about women’s roles in Victorian England.
Also reviewed by: Bell Literary Reflections, A Work in Progress, A Striped Armchair, A High and Hidden Place, It Never Stops

Anonymous said…
It sounds intriguing. Was it an easy read? Sometimes I find these older books hard to get through.
June 18, 2008 at 3:42 PM

jenclair said…
I've heard about this title for so long and have never got around to reading it, but after your review, it is definitely on my list. I love Wilkie Collins from the same period, and this one sounds as if it has a similar allure.
June 19, 2008 at 8:25 AM

Trish @ Love, Laughter, Insanity said…
This one was fun to read, but I agree that the writing was a little ehhhhh and the ending a little too contrived. I hope you're still planning on joining us for the classics challenge! You certainly do read a lot of them!
June 19, 2008 at 9:34 AM

Danielle said…
I think she actually published several novels the year she wrote Lady Audley, so she was really cranking them out. I thought the ending sort of contrived as well, but it was so entertaining to read I was willing to overlook that.
June 19, 2008 at 11:30 AM

Jane said…
Thanks for the link! I enjoyed the book quite a bit and am looking forward to reading more by Braddon. I understand not caring for the melodrama but it was no doubt good fun for a repressed Victorian womanhood. Kind of like a soap opera today.
June 22, 2008 at 1:11 PM

November 26, 2011
Pages: 315 Original date of publication: 1847 My edition: 1981 (Bantam Classics) Why I decided to read: Re-read; first read summer 2002 How I acquired my copy: Barnes and Noble, summer 2002 I first read this in 2002, when I did an internship in Chicago and went on a classics reading kick that summer, and this book was one of them ( Vanity Fair and Bleak House were two of the “loose baggy monsters” I read that summer). Although I’d read Charlotte’s Jane Eyre several times in school, Wuthering Heights was, for some reason, never on any of the syllabi for any of the classes I took (and English was my major!). Wuthering Heights is a complicated novel, and it probably says a lot about Emily Bronte herself. The novel is melodramatic at times, and it contains two narrators: an old former family servant and a near neighbor, neither of whom is an observant or reliable narrator (at the beginning of the book, Mr. Lockwood thinks that a pile of dead rabbits is a cat). Emily Bronte had a w
1 comment
Read more

January 01, 2017
January: 1. London: the Novel, by Edward Rutherfurd 2. Notes from a Small Island, by Bill Bryson 3. A Very English Scandal, by John Preston 4. Imagined London, by Anna Quindlen 5. The Black Dahlia, by James Ellroy 6. In Cold Blood, by Truman Capote February 1. Sense and Sensibility, by Jane Austen 2. The Girls of Slender Means, by Muriel Spark 3. Patience, by John Coates 4. Into the Whirlwind, by Eugenia Ginzburg 5. The Turn of the Screw, by Henry James 6. Few Eggs and No Oranges, by Vere Hodgson 7. Vittoria Cottage, by DE Stevenson March: 1. The Exiles Return, by Elizabeth de Waal 2. Northanger Abbey, by Jane Austen 3. The Death of the Heart, by Elizabeth Bowen 4. The Buccaneers, by Edith Wharton 5. The Death of the Heart, by Elizabeth Bowen 6. White Teeth, by Zadie Smith April: 1. The Heat of the Day, by Elizabeth Bowen 2. The Two Mrs. Abbotts, by DE Stevenson 3. The Road to Little Dribbling, by Bill Bryson May: 1. London War Notes, by Mollie Panter-Dow
6 comments
Read more

April 15, 2013
Pages: 473 Original date of publication: 1909-1986 My copy: 2012 (Persephone) Why I decided to read: How I acquired my copy: Persephone subscription, January 2013 The Persephone Book of Short Stories is a collection of thirty short stories—some that have been previously published in other Persephone books (crowd pleasers such as Minnie Panter-Downes’s “Good Evening, Mrs Craven” and Irene Nemirovsky’s “Dimanche”)—some that have been published in the Persephone Post , and others that appear here for the first time. The earliest story in the collection, Susan Glaspell’s“A to Z,” was published in 1909 and the last, Georgina Hammick’s “A Few Cases in the Day Case Unit,” in 1986. My favorite story in the collection is the first: Susan Glaspell’s “A to Z,’ in which a young college graduate gets a job as a dictionary copyist at a publisher’s office. She strikes up a friendship with a young man at the office; the irony of the story being that while these characters’ bread
2 comments
Read more