Review: The Secret History of the Pink Carnation, by Lauren Willig 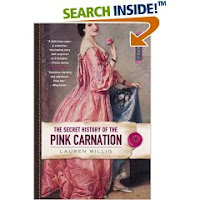 It’s 1803, and the Scarlet Pimpernel and the Purple Gentian have wowed Europe with their daring exploits. Amy Balcourt is a twenty-year-old, adventurous English girl who, in joining the League of the Purple Gentian, wishes to become a spy herself. She, along with her cousin Jane and their escort Miss Gwen, go to France, where they meet Lord Richard Selwick, also known as the Purple Gentian. A case of confused identities ensues in a bad parody of good spy fiction.

The Secret History of the Pink Carnation is, first and foremost, chick lit, with historical accuracy taking a backseat. For someone who was supposed to be so smart, she behaved like a twit sometimes—for example, thinking that another character (a well-known rake) is the Purple Gentian, she makes an assignation with him in a dark, secluded space. I thought it was also rather ridiculous that she really didn’t know who the Purple Gentian was until the last minute. The prose of this book is also laughable: when talking about her “feelings” for the Purple Gentian (who she’s only met twice at the time this passage occurs, and both times when his face was covered), Amy thinks: “Oh, but she had been so sure of her feelings for the Gentian! And of his for her. His promise of a necklace of stars had seemed to be a sort of divine seal of approval, marking him out as her official, one and only true love.” Please. Like anyone could be so naive. I only continued reading to find out if Amy would learn from her mistakes. She never did.

The spies don’t seem to sneak around all that much; at one point Lord Richard emerges from the front door of his house in his disguise. He also seems to spend an inordinate amount of time staring at Amy’s behind; in one part, the book literally becomes a bodice-ripper, heavy panting and bad sexual innuendoes included. The politics of the period, and the court of Napoleon, seem like a trip to Disney World. The characters all have modern day behavior and speech patterns. For example, at that time a man would never call a woman by her first name if she wasn’t related to him.
With regards to Eloise, the graduate student who writes her thesis on the Pink Carnation, I found it hard to believe that she couldn't figure out who the Pink Carnation was sooner. Eloise's story seemed like a rude, unwelcome interruption into the main narrative.
Also reviewed by: Reading Adventures, Once Upon a Bookshelf, A High and Hidden Place, Shh I'm Reading

Trish @ Love, Laughter, Insanity said…
Sounds like it could have been good... I read the Scarlet Pimpernel last year for a classics challenge and enjoyed it despite the obvious plot.
May 8, 2008 at 7:29 PM

Anonymous said…
I just read this book for my book club and will be posting a review soon. Even though you have some valid points, some of the things that irked you didn't bother me one bit. I just looked at it as a really fun read.
May 8, 2008 at 8:02 PM

Anonymous said…
Your review is very well done. I, too, recently read this one for my book club.

I agree that it was rather obvious who the Pink Carnation was. Not much of a mystery there.

I have to say, I enjoyed the bad sexual innuendo. It was quite amusing.