Review: The Egyptologist, by Arthur Phillips 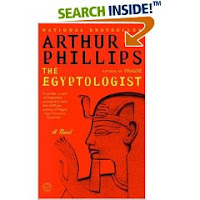 With just the right kind of ironic humor, Arthur Phillps tries to capture the life of a fictional Egyptologist, Ralph M. Trlipush, in the latter part of the year 1922.

An eccentric old man named Barnabas Davies dies, with the intent to find, and compensate, illegitimate children he has scattered all over the world. The investigation leads to one Paul Caldwell of Sydney, Australia, born in the early 1890s and vanished mysteriously in the Egyptian dessert in the First World War. Who was Paul Caldwell? And who is (or was) Ralph Trilipush, the supposed English professor of Egyptology at Harvard University and engaged to the American heiress, Margaret Finneran? Through diary entries and letters, the author follows two stories: Trilipush's, as he prepares to uncover the tomb of an ancient Egyptian pharoah named Atum-hadu; and that of an Australian detective, Harold Ferrell as he recounts his story from a retiring home in the 1950s. The various perspectives each of these two narrators have on the events contained herein are fascinating. Personal bias really and truly does have an effect on the way we view the world.

"Just how secret is secret enough?" is a question Trilipush poses on the matter of Atum-hadu and his buried tomb; but that same question might easily be asked of Trilipush's own life. Ralph gives us marvelous, self-centered accounts of growing up in Trilipush Hall in Kent, which, as the reader will find, are untrue; might also his account of discovering the tomb prove to be a fabrication? There are also mixed accounts of Trilipush's education, as well as his sexuality. The more one plunges into the story line, the more one finds that the stories of Ralph Trilipush and his Egyptian king are remarkably similar. Both seek to achieve immortality through a "third birth." This book is filled with Egyptian lore and trivia, as well as the fictional account of the life of Atum-hadu.

On the flip side is the story of Trilipush's fiancée, Margaret Finneran, and her father, who owns a department store chain in Boston. Both of these characters keep secrets from Trilipush which threaten to destroy the relationship between the Egyptologist and the American girl.
What I thought was marvelous was the deprecating way in which Trilipush describes Howard Carter, who at the moment this narrative takes place uncovers the tomb of Tutankhamen. Lord Carnarvon is secretly called "Lord Cashbags." I also loved the comments Trilipush makes about American tourists and the Egyptian natives. There is, of course, the highly-touted "mystery," which can easily be solved. But the mystery is NOT the point of this novel. This excellent book is a detailed account of a man struggling with his own identity.
Also reviewed by: A Guy's Moleskin Notebook