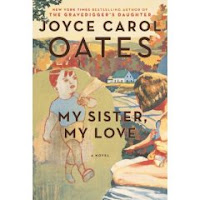 On June 24, prolific author Joyce Carol Oates has a new book coming out, and I must say that the cover is dreadful! The title is My Sister, My Love: The Intimate Story of Skyler Rampike (dreadful in and of itself), and, as in her 2001 novel Blonde (about the life of Marilyn Monroe), Oates tries to take on a controversial subject: the death of Jon Benet Ramsey (only she gives the character a new name). I’m honestly surprised by this cover—considering some of the great covers Oates’s books have had in the past, I would have expected something better. But Oates’s name is what sells her books. Here, the little boy on the left looks downright creepy, and his back leg is at a weird angle. Plus, the cut-out “inset” doesn’t really work for me. What say you?

Anonymous said…
Was the mysterious murder case of the young beauty queen ever solved? Given this controversial premise, I might as well give my first try of her. :)
May 28, 2008 at 4:30 PM

Katherine said…
Oates is a fantastic writer--definitely give it a shot. I recommend them (her first novel; the title isn't captialized), Blonde, or We Were the Mulvaneys/
May 28, 2008 at 4:40 PM

Trish @ Love, Laughter, Insanity said…
I'd say that's pretty bad. I own a book of hers but all I've read are her short stories. For some reason I haven't had a strong desire to pick up the book (Mulvaneys)
May 29, 2008 at 7:49 AM

Anonymous said…
When I first picked this book up I definitely agreed, but now that I've finished it it's a strangely agreeable cover. (The boy's bent leg (assumedly) has to do with an accident he has in the book.)
November 4, 2008 at 5:42 PM

November 26, 2011
Pages: 315 Original date of publication: 1847 My edition: 1981 (Bantam Classics) Why I decided to read: Re-read; first read summer 2002 How I acquired my copy: Barnes and Noble, summer 2002 I first read this in 2002, when I did an internship in Chicago and went on a classics reading kick that summer, and this book was one of them ( Vanity Fair and Bleak House were two of the “loose baggy monsters” I read that summer). Although I’d read Charlotte’s Jane Eyre several times in school, Wuthering Heights was, for some reason, never on any of the syllabi for any of the classes I took (and English was my major!). Wuthering Heights is a complicated novel, and it probably says a lot about Emily Bronte herself. The novel is melodramatic at times, and it contains two narrators: an old former family servant and a near neighbor, neither of whom is an observant or reliable narrator (at the beginning of the book, Mr. Lockwood thinks that a pile of dead rabbits is a cat). Emily Bronte had a w
1 comment
Read more

January 01, 2017
January: 1. London: the Novel, by Edward Rutherfurd 2. Notes from a Small Island, by Bill Bryson 3. A Very English Scandal, by John Preston 4. Imagined London, by Anna Quindlen 5. The Black Dahlia, by James Ellroy 6. In Cold Blood, by Truman Capote February 1. Sense and Sensibility, by Jane Austen 2. The Girls of Slender Means, by Muriel Spark 3. Patience, by John Coates 4. Into the Whirlwind, by Eugenia Ginzburg 5. The Turn of the Screw, by Henry James 6. Few Eggs and No Oranges, by Vere Hodgson 7. Vittoria Cottage, by DE Stevenson March: 1. The Exiles Return, by Elizabeth de Waal 2. Northanger Abbey, by Jane Austen 3. The Death of the Heart, by Elizabeth Bowen 4. The Buccaneers, by Edith Wharton 5. The Death of the Heart, by Elizabeth Bowen 6. White Teeth, by Zadie Smith April: 1. The Heat of the Day, by Elizabeth Bowen 2. The Two Mrs. Abbotts, by DE Stevenson 3. The Road to Little Dribbling, by Bill Bryson May: 1. London War Notes, by Mollie Panter-Dow
6 comments
Read more

April 15, 2013
Pages: 473 Original date of publication: 1909-1986 My copy: 2012 (Persephone) Why I decided to read: How I acquired my copy: Persephone subscription, January 2013 The Persephone Book of Short Stories is a collection of thirty short stories—some that have been previously published in other Persephone books (crowd pleasers such as Minnie Panter-Downes’s “Good Evening, Mrs Craven” and Irene Nemirovsky’s “Dimanche”)—some that have been published in the Persephone Post , and others that appear here for the first time. The earliest story in the collection, Susan Glaspell’s“A to Z,” was published in 1909 and the last, Georgina Hammick’s “A Few Cases in the Day Case Unit,” in 1986. My favorite story in the collection is the first: Susan Glaspell’s “A to Z,’ in which a young college graduate gets a job as a dictionary copyist at a publisher’s office. She strikes up a friendship with a young man at the office; the irony of the story being that while these characters’ bread
2 comments
Read more