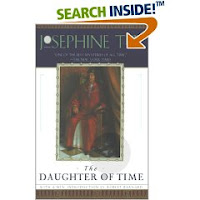 I was introduced to Josephine Tey through a group I belong to on Shelfari.com. We have an informal book group and discussion, and this is our most recent selection. It’s the first Tey I’ve read, and it won’t be the last. It features a character who apparently recurs in several of her novels, Inspector Alan Grant of the Scotland Yard.

Laid up after suffering a broken leg, Grant tries to dispel the boredom by trying to solve an unsolved crime: the mysterious disappearance of the two princes in the Tower in the fifteenth century. Using the evidence presented to him, Grant and his research associate from the British Museum come up with a satisfactory and believable solution to a problem that has puzzled people for over five hundred years.

One thing I found difficult to believe in this mystery was the fact that Grant knew so little about the history of his own country. For example, he didn’t recognize a famous portrait of Richard III on sight. And that he was easily convinced by Thomas More’s “evidence” of Richard’s having murdered the boys, keeping in mind that More was writing after the fact, in the reign of a Tudor. Its also pretty obvious what Grant’s conclusion is going to be about the mystery. But that said, that conclusion is completely believable (and, I suspect myself, most likely true). It’s a short mystery that will keep you entertained for an afternoon or so.
Also reviewed by: Reading Adventures, Between the Covers, Shelf Love