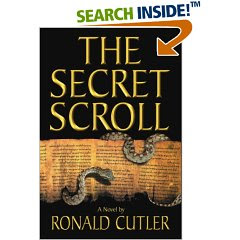 Centered around a Da Vinci Code-esque mystery that features something akin to the Dead Sea Scrolls, The Secret Scroll begins when Josh Cohan, an archeological professor, makes an important discovery in the desert outside of Jerusalem. It turns out that the scrolls were written by Jesus Christ, who was, according to this book, a Gnostic. Josh is then led on this whole action-adventure, in which his faith is tested. There’s a lot of promise, but ultimately, the novel fails to deliver.

When I began reading The Secret Scroll, I thought, "you have GOT to be kidding me." The people who agented, edited, copyedited, and published this book need to be fired. However, I don't think any editor could have saved this book; the flaws are much deeper than grammatical. There's hardly any plot here (or at least any plot that makes sense), and the book is riddled with trite clichés, writing geared toward a sixth grader, and oversimplification of archeological trivia which insults the intelligence of the average reader. There are also far too many coincidences for this novel to be plausible.

The book failed to pique my interest, right from the (very) bad first sentence: "Josh Cohan was feeling spiritually enlightened." From there, it only gets worse, and the reader must suspend all belief. It takes a much hardier reader than I am to finish this book; I quit at around the halfway mark. There are too many other, good books for me to waste my time with this one.

It's a sad day for the state of the publishing industry when it produces stale fluff like this.

The Bookworm said…
I linked your review to mine...I guess we agree to disagree on the book :) I liked it.