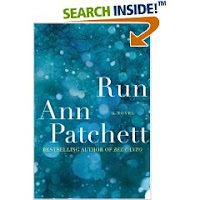 Run is the story of family--that which we are born into and that which we create for ourselves. Bernard Doyle, former mayor of Boston, is father to three children: Sullivan, the "black sheep;" Tip, the intellectual who has no interest in going into politics and spends his time at Harvard in the fish department; and the life-loving Teddy, the athlete of the family. The latter two are adopted.
Run takes place over the course of a single day in January, when Tennessee Moser, single mother to Kenya, is hit in a car crash wile trying to save the life of her son, Tip. Kenya quickly becomes a part of the Doyle family.
I had mixed feelings about this novel. I feel compelled to give this book a higher rating than I might otherwise have done; I loved Patchett's Bel Canto. But I just couldn't get into the plot the way I did with Bel Canto. Run definitely read like a Lifetime Original Movie drama. There was this great family tension, but Patchett never really drew it out the way she could have done. I also thought she wussed out by having Bernadette (Bernard and Bernadette? Too cute) Doyle die before the story takes place, so that the birth and adopted mothers didn't have to deal with each other. There could have been such a great story to tell there. On the other hand, I love Patchett's writing style. She really knows how to get at the emotions of her characters. I look forward to seeing what she writes next.
Also reviewed by: Medieval Bookworm, Savvy Verse and Wit, The Bluestocking Society, She Is Too Fond of Books, Life and Times of a "New" New Yorker, The Printed Page

Going Crunchy said…
Hi! Thanks for stopping by.

Man, I read about 20 books a month I think. They aren't all adults though so that way speeds it up.

Anna said…
I enjoyed Run, but I agree that Patchett could have done more, especially with the character of Sullivan.

I've added your link to my review, which is here:
http://diaryofaneccentric.blogspot.com/2008/09/run-by-ann-patchett.html

I've heard good things about Bel Canto and can't wait to read that one!