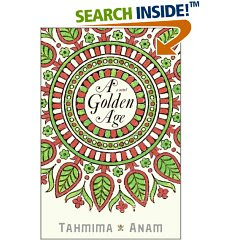 A Golden Age is a complicated novel about a woman during the Bangladeshi War for Independence. Rehana Haque is a widow with two children on the cusp of adulthood in the spring of 1971, when a revolution in Dhaka changes their lives, and those of their friends, forever. While the world rages around them, Rehana attempts to come to terms with the choices her almost-grown son, Soheil, and daughter, Maya, have made. And, despite herself, Rehana finds herself getting involved into the revolutionary movement, despite her indifference to it.

Family relationships play a strong role in this novel, for a poignant revelation about what a mother will do for her children. The novel is short, but complicated and dense. You can't help but get sucked into these characters' lives, so different from our own. The title of the book, A Golden Age, is a bit misleading (considering that the period was hardly golden), but it comes from the name of Rehana's house, Shona, which means gold in Bengali.

While the novel is a little bit choppy in some places, Tahmima Anam is a powerful writer who only promises to grow stronger. A Golden Age is the first book in a trilogy.
Also reviewed by: Book Chronicle, Literary License So Many Precious Books, So Little Time, Historical Tapestry, Trish's Reading Nook