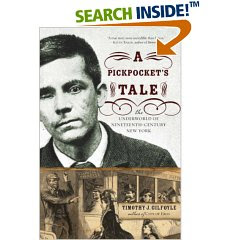 A Pickpocket's Tale is a close, intimate look inside of New York's underworld in the nineteenth century. Ostensibly about one criminal, the half Chinese, half Irish George Appo, the book is more a sociological work about the institutions of crime and punishment as they existed then. Born in poverty in 1856 (or -8), Appo began as a newspaper boy, then graduated to the career of pickpocket. He served time in all kinds of detention centers, from Sing Sing to Eastern State Pen in Philadelphia, to a stint on Blackwell's (now Roosevelt) Island, to a short period in the Matteawan Hospital.

The book gives its reader an in-depth look at everything from street crime in the Five Points district up to Appo's short-lived careers in acting and law enforcement. Appo was an obscure figure who was given a one-sentence mention in Herbert Asbury's The Gangs of New York, but Appo really was an archetype of his time and situation. What was amazing to me was that, even though he was nearly illiterate for a long period and never went to a day of school in his life, he still managed to write a memoir of his extraordinary life.

In all I thought A Pickpocket's Tale was an excellent book about the crime life of New York City in the nineteenth century and is better perhaps even than Herbert Asbury's classic book.