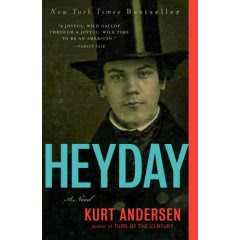 Heyday follows the story of four young Americans during the tumultuous years of 1848-9. The novel opens in Paris in February 1948, when the aristocratic Englishman Ben Knowles witnesses an uprising. Eventually, he escapes to the United States, where he quickly befriends Polly and Duff Lucking, and Timothy Skaggs. They’re each of them unique, quirky characters, and I enjoyed reading about them as they make a transcontinental voyage to California followed by a Frenchman in search of vengeance. It’s a journey that’s at once exciting and full of danger.

I had mixed feelings about Heyday. I’ve been reading reviews about the book on Amazon.com, and my grumblings about the novel are pretty much the same as theirs are. The four main characters become involved—accidentally or no—with nearly every moment of historical significance in 1848 and -9. However, despite all the change that surrounds them, Ben, Polly, Duff, and Skaggs don’t really seem to change that much themselves. I like to see characters grow and expand in a novel, not remain static. They also seemed like 21st-century people who just happened to drop in on the 1840s. Sometimes the dialogue and events didn’t ring true to me. And I thought that Ben and Polly’s relationship could have been fleshed out a bit.

Another complaint I have about the book is the fact that Andersen name-drops a lot. It seems that the four main characters run into every real person of significance of the period. I’m all for historical veracity, but not if it’s going to be superfluous. Along the way, for example, we meet Charles Darwin, Walt Whitman, Horace Greely, and hear from Brigham Young. But none of those characters plays significantly in the narrative. Rather, all the name dropping detracts from the story.

All that said, however, Andersen did a terrific amount of research, the kind you don’t nearly run into in novels of this caliber. The overarching theme of the book is that life is in the timing. It’s only coincidence that these four idiosyncratic characters live in this particular period and witness and do all that they do. It’s a completely fantastic historical backdrop and one that I enjoyed reading about.