Review: Sin In the Second City, by Karen Abbott 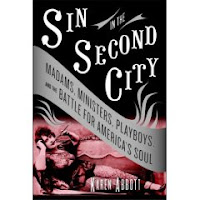 Sin In the Second City, by Karen Abbott is the story of the two Everleigh sisters, Ada and Minna, who came to Chicage in 1899 to begin their own high-class brothel, one of the most notorious in the Levee district of the city. The sisters come to life as they encounter a variety of adversaries: Vic Shaw, the rival madam who tried, unsuccessfully for a while, to bring the sisters down; the Weiss brothers, wo ran the brothel next door; and most of all the reformers who tried to shut the brothels down. Sin In the Second City takes place in an era when Chicago, and the United States, were changing.

Abbott brings the past to life, and sometimes I kept forgetting that this isn't fiction. The Everleigh sisters were a complicated pair of women, who actually hated men; they simply learned how to handle them. I absolutely adored this book. As a blurb on the back of the book by Sarah Gruen, author of Water for Elephants (which I admit I haven't read), says, "Sex, opulence, murder--what's not to love?"

May 15, 2008
Forever Amber takes place in the 1660s, immediately follwing Charles II's ("the Merry Monarch") return of the Stuarts to the English throne. The book features Amber St. Claire, a young woman who starts out as a sixteen-year-old country girl, naieve to the workings of the world. She immediately meets Bruce Carlton, a dashing young Cavalier, with whom she has a passionate love affair in choppy intervals throughout the book. They have two children together, but Bruce won't marry her for the reason he tells his friend Lord Almsbury: that Amber just isn't the kind of woman one marries. Upon following Bruce to London, he goes to Virginia, leaving her to fend for herself. What follows is a series of affairs and four marriages, with Bruce coming back from America now and then. Amber's marriages are imprudent: her first husband is a gambler, her second is an old dotard, her third locks her up in the house for days and won't let her out; and the last is a fop wh
2 comments
Read more

May 25, 2012
Pages: 294 Original date of publication: 1963 My edition: 2010 (Harper Perennial) Why I decided to read: How I acquired my copy: Barnes and Noble, Phoenix, January 2011 A Tree Grows in Brooklyn is one of my all-time favorite books and I’ve read it, oh, half a dozen times, so I was interested to see how Joy in the Morning would compare. Set in the late 1920s, Joy in the Morning begins when Annie, aged 18, comes to a small Midwestern college town where her fiancée, Carl, is in law school. The novel opens with their marriage in the county courthouse, and follows the couple through their first year or so of marriage. It’s a struggle, because Carl and Annie are basically children themselves, for all the ways in which Carl tries to appear more adult-like. Annie is endearing; she’s ignorant but a voracious reader, reading everything from Babbitt to War and Peace. Betty Smith’s novels are pretty autobiographical; Joy in the Morning is (unofficially) a kind of sequel to A Tree Grows i
5 comments
Read more

October 19, 2010
Pages: 254 Original date of publication: 1964 My edition: 1964 (William Morrow) Why I decided to read: it was 90 degrees outside at the time and I decided it was time to read another book by a favorite author How I acquired my copy: from Susanna Kearsley, December 2009 Sometimes, whether or not I decide to read a book depends on the weather. Mary Stewart’s books are best read on either very hot or very cold days; and since it was 90 degrees out one weekend a couple of weeks ago, I decided that this one would be perfect. And it was. This Rough Magic takes its title from The Tempest , a play from which this novel takes off. Lucy Waring is a struggling actress who comes to visit her sister on Corfu. One of her neighbors is a renowned actor who’s taken a bit of a sabbatical and his son, a musician with whom Lucy comes to blows at first. This Rough Magic is vintage Mary Stewart, with a murder or two, a mystery, romance, suspense, and lots of magic thrown in. Lucy
4 comments
Read more