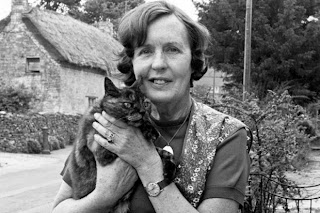 This year seems to be The Year of Barbara Pym; I know some of you out there are involved in some kind of a readalong in honor of the 100th year of her birth. I’ve read most of her canon, with only The Sweet Dove Died, Civil to Strangers, An Academic Question, and Crampton Hodnet left to go (sadly). Barbara Pym’s novels feature very similar casts of characters: spinsters, clergymen, retirees, clerks, and anthropologists, with which she had direct experience. So it stands to reason that there would be overlaps in characters between the novels. You can trace that though the publication history of her books and therefore see how Pym onionizes her stories and characters. She adds layers onto layers, adding more details as her books progress.

Excellent Women (1952):
Archdeacon Hoccleve gives a sermon that is almost incomprehensible to Mildred Lathbury; Everard Bone understands it, however, and laughs hysterically (ch. 9). The Archdeacon fails to show up later on because he has gone back to Some Tame Gazelle. Mildred holds an annual lunch with William Caldicote, with whom it is hoped that they will "get off."Esther Clovis appears here as well.

Jane and Prudence (1953):
Miss Doggett receives a letter from Mildred Lathbury, informing her of her marriage to Everard Bone. Later, a stranger offers Prudence and Geoffrey advice on the menu; he turns out to be William Caldicote and we find out why his relationship with Mildred Lathbury might never have worked.

Less Than Angels (1955):
Esther Clovis is now the narrator. Mildred (Lathbury) Bone now works in the field in conjunction with her husband. There is a reference to Helen Napier and Miss Jessop from Excellent Women. Catherine Oliphant makes an appearance for the first time. Tom Mallow is a prototype for Rupert Stonebird in An Unsuitable Attachment.

A Glass of Blessings (1958):
A short story by Catherine Oliphant is read by some of the other characters; the story reworks an episode from Less Than Angels. There are references to Rodney, who previously had an affair with Prudence Bates from Jane and Prudence. Archdeacon Hoccleve is mentioned as being a distant cousin of the narrator and Julian Mallory, previously of Excellent Women, comes to preach at Saint Luke’s. Members of the congregation from both Saint Luke’s and that from Excellent Women mingle together.

No Fond Return of Love (1961):
Dulcie’s lodger finds a copy of Some Tame Gazelle in her bathroom (ch. 8). Father Tulliver from Less Than Angels makes an appearance.

Quartet in Autumn (1977):
No allusion to any of her previous novels.

The Sweet Dove Died (1978):
Senhor MacBride-Pereira, the Portuguese gentleman from No Fond Return of Love, makes a brief appearance here.

A Few Green Leaves (1985):
Dr Gellibrand’s brother is Father Gellibrand, who conducted Marcia’s funeral in Quartet in Autumn. The death of Esther Clovis from Less Than Angels, who had once helped Emma get a grant, is announced in a newspaper, and Digby Fox attends her funeral.1

I can’t take credit for putting the above together; the article below can be found on JSTOR.

What I thought was interesting was that what Pym’s use of crossover characters reveals is that there’s never really any narrative “closure” to these novels and therefore we can hear what happens to many of them without the author really needing to write a sequel to their stories. In her subtle and clever way, Pym shows us the interconnectedness of human life and that we are all connected to one another more than we might think.

1. A Fistful of Pyms: Barbara Pym's Use of Cross-over Characters. Alan W. Bellringer. The Yearbook of English Studies. Vol. 26, Strategies of Reading: Dickens and after Special Number (1996), pp. 199-207.

Guernsey Girl said…
Long live characters in novels...I love the idea that there need be no closure and that fictional people can be explored and developed just as the author pleases. Fascinating post.
March 23, 2013 at 3:40 PM

Karen K. said…
I've still only read three Pyms. . . but I am celebrating her centenary by collecting as many as possible!! I was hoping to read one a month but it'll never happen.
March 24, 2013 at 9:44 AM

Jason said…
Thete are many more examples. For example, there is the mention in A Few Green Leaves of a character having eaten 'sole nantua' at Father Thames', cooked by a Mr Bason. This is a reference to A Glass of Blessings.