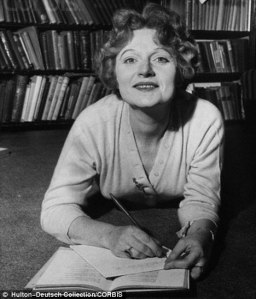 Undoubtedly someone else is going to have this idea and write a short biography of Muriel Spark for Muriel Spark Reading Week, but I thought I’d look up some information on her in order to get a sense of her background and her writing. And when I research something, I kind of go overboard! Prior to this week, I’ve read four of her books: The Prime of Miss Jean Brodie, A Far Cry From Kensington, The Girls of Slender Means, and Memento Mori. I’ve reviewed the last three on this blog and I’ve chosen to read Territorial Rights (for sure) for MSRW and possibly Aiding and Abetting.

Muriel Spark (nee Camberg) was born on February 1 1918 in Edinburgh, Scotland, and attended the James Gillespie’s High School for Girls, which later served as inspiration for The Prime of Miss Jean Brodie. Spark married Sidney Oswald Spark in 1937 and moved with him to Rhodesia. Her son Robin was born in 1938 and during WWII, after learning about her husband’s mental instability, Spark left her him and her son in order to work for the Foreign Office in a secret division that disseminated black propaganda. While she was in London, Spark lived at the Helena Club, which became the inspiration for the May of Teck Club from The Girls of Slender Means. She joined the Roman Catholic Church in 1954, a fact that would affect most of her writing in that she was able to see the larger picture. She died on April 13, 2006 in Florence, Italy.1

Muriel Spark began writing seriously after the war, beginning with poetry and literary criticism. Her first novel, The Comforters, was published in 1957, and The Prime of Miss Jean Brodie, which became one of her better-known books, was published in 1961. She later won the James Tait Black Memorial prize for The Mandelbaum Gate, has been shortlisted for the Booker Prize twice (for The Public Image and Loitering With Intent) and in 1993 was made Dame Commander of the Order of the British Empire. Starting in the 1940s, Spark made a decision to save all documentary evidence, which she later used to write her autobiography, Curriculum Vitae, and which is now held by the Muriel Spark Archive at the National Library of Scotland.2There are certain similarities that can be seen throughout all of Spark’s fiction: intrigue, the macabre, a self-enclosed community, a sensational event (murder, blackmail, etc), and some sort of supernatural element.

StuckInABook said…
Thanks for doing this - adds further dimensions to all the reviews across the blogosphere :)
April 25, 2012 at 6:27 PM