Happy Sunday! For someone as anti-social as I am, I was quite busy this week! On Friday evening I had drinks with an old friend from middle and high school, and then yesterday I went to go see My Week With Marilyn, about Marilyn Monroe’s 1956 filming of The Prince and the Showgirl (with Sir Laurence Olivier, played by Kenneth Branaugh in this film). The story focuses on a young third assistant producer/director (aka: gopher) who strikes up a friendship with Marilyn (played by Michele Williams here) on set. I thought it was a really enjoyable film. You may or may not know that Marilyn was actually a great reader, leaving behind a library of 400-plus volumes at the time of her death. There’s a subtle nod to that in the film; Marilyn has a copy of James Joyce’s Ulysses in her dressing room. 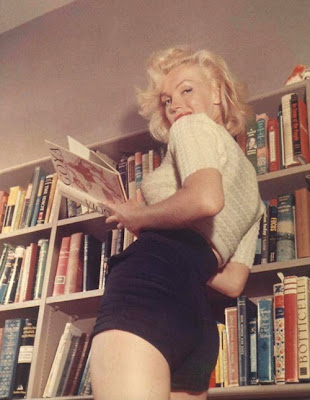 In other news, classes began again this week—I’m taking two, one on editing and the other on research strategies for biomedical writers. We had our first “meeting,” i.e., webinar, for the editing class on Wednesday evening, and already I can tell that It’s going to be fun—a lot of hard work, but fun. I’m doing it part-time, because there’s so much to do and I’m working full-time meantime. So I should be about 40 by the time I finish my degree! But I think it’ll be worth it.

Despite the business of everything else, I still had time for some reading; I finished EM Delafield’s Consequences, a bleak novel about what happens to one very socially awkward spinster during the Edwardian period. Oh, man, is it depressing! Certainly a lot different from Diary of a Provincial Lady.

So how was your week? What did you read?