Happy Sunday! So much has gone on around here in the past few weeks that I don’t even know where to start! Last Sunday my sister and I came back from a 10-days vacation to London and York where we saw positively everything! We got there on Friday the 2nd, late at night, and on Saturday, we went to the British Museum, which has to be my favorite London museum. They’ve got an exhibition on right now on medieval relics and reliquaries that had me drooling—reliquaries and manuscripts and other devotional objects, one of which was the MS of Matthew Paris’s Chronica Majora! Stunning. Then we went to the Persephone shop, where I picked up a copy of Reuben Sachs. In the afternoon we went to Regent Street and Piccadilly. Went to the enormous Waterstone's there, where I went to the fiction section while my sister went to look at the art books. She came back 15 minutes later to find me with an enormous stack of books in hand! They just don't make books in the US like they do in the UK.

On Sunday the 4th we went to the Victoria and Albert Museum, and Harrod’s, and then some shopping in the Kings Road. I picked up a beautiful, albeit expensive, jacquard skirt at Jigsaw, which is now one of my favorite clothing stores!

On Monday my sister and I took the train to York, where we did York Minster in the afternoon and explored some of the shops in Stonegate.

On Tuesday we went to several of the many museums in York, including the York Art Gallery (very random collection, but interesting), the Yorkshire Museum and Museum Gardens, and then we had tea at Betty’s, which does in fact make you feel as though you’re sitting in a fishbowl! But the tea and fruit scones were delicious. Walked on the old Roman walls, and then back up through Micklegate back into the center of town.

On Wednesday we went to Jorvik Viking Center… then we climed to the top of Clifford’s Tower and went to the York Castle Museum, which was also a bit random in its collection but fun, and then Fairfax House, which is an 18th century house which had a display on on post-Revolutionary fashion. Did some more shopping. York is a neat little tow, and I think we could have done it in just two days instead of the three we gave it.

On Thursday my sister and I took to the train back down to London, where we split up for a while—she did a ton of walking while I went to the Persephone shop for the teatime book group discussion of Reuben Sachs. It’s a group that meets once a month to discuss the books in number order, and they all kind of knew each other. So I was a little bit startled when Nicola asked me to cut the cake! But the discussion was fun and interesting, and I definitely think I’d go again if I ever had the chance. I also got a great deal of book shopping in: I found a lode of VMCs in a secondhand shop called Skoob Books, not too far from the Persephone shop.

On Friday we did a ton of walking: we went to Buckingham Palace (where THE famous wedding dress is on display until the beginning of next month); then we walked down past Westminster, over Westminster Bridge, and along the South Bank, where of course I had to stop at the South Bank Book Market. We stopped for lunch, and then on to the new Globe Theatre to see Much Ado About Nothing, which was FABULOUS. Then we walked back across to St. Paul’s and took the tube to the National Gallery, where we saw an exhibition on medieval altarpieces, had dinner in the café in the crypt at St. Martin’s in the Fields, and went to the National portrait Gallery. Whew!

On Saturday we went to Portobello Road, which was A LOT crowded than I thought it would be; I mean, by the time we left at 11, people were STREAMING in! I’m glad we got there early. Large crowds send my sensory integration issues into overdrive, so it was a bit stressful. In the afternoon we did some more shopping, including another trip back to Piccadilly, where I went to Hatchard’s—quite possibly one of my favorite London bookshops, I can never leave there emptyhanded!

And then we left on Sunday… sadly… but it was a fantastic trip! I went a little bit overboard on the book shopping; grand total was 34 books! Pictures TK…
This week I was thrown back in at work, and I’ve also been catching up on schoolwork, so I’ve been quite busy. This weekend I’m still unpacking, logging my books, and uploading pictures from the trip—my sister has already posted hers on Facebook, so here’s one of me at the South Bank Book Market on Friday. FYI, I had no idea I'm such a hunchback! I also did laundry, worked out, and wrote six pages of a ten-page paper I have to write for school—so weird that I’m technically back in school again, even though the class is online!

How have you all been? 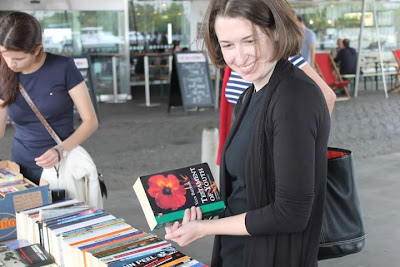 Aarti said…
WOW, awesome vacation! I haven't been to England since I studied abroad in college, but I was in Scotland a few years ago and loved it. I hope to make my next trip to the UK coincide with the Welsh Hay-on-Wye book festival :-)
September 18, 2011 at 2:04 PM

Danielle said…
Sounds like a lovely time! I hope you'll share more photos and a rundown of your book finds! I'm envious of the Viragos especially as I never find them locally!
September 18, 2011 at 6:36 PM

Marg said…
Sounds like a lot of fun! I can't imagine just going to England for a week! Aah, the tyranny of distance and expense.