Why I decided to read: I was in the mood for some nonfiction during Persephone Reading Week

How I acquired my copy: Persephone mail-order, January 2011

Originally published by Virago in 1983, A Very Great Profession: The Woman’s Novel 1914-1939 is a fantastic overview of the woman’s novel in the interwar years (interesting that “woman” is in the singular, not plural, here). The book is divided not chronologically but by theme, covering such diverse topics as War, Spinsters (ie, Surplus Women), Love, and Sex. Beauman draws from some of the popular middlebrow women writers of the period, many of whom were later revived by Persephone and Virago. These are the writers that the average woman of the period would have borrowed from Mudie’s or Boots, and the authors of these books dealt with their topics in a way that were accessible to their readers.

This is a well-researched and perceptive overview of women writers and their novels between the years of 1914 and 1939, with an afterword by Beauman that was written in 1995 in which she mentions what she might have done differently in the book. The book highlight a number of women writers that many people today haven’t heard of, yet were widely read when their novels were published. It’s interesting to read about how Beauman wrote the book; she only wrote about the books she truly enjoyed, which was reflected much later when she started Persephone. It’s amazing how many of these novels are out of print or hard to find; when Beauman was researching this book, she had to use her resources in order to track them down (no internet at the time, and she couldn’t get into the British Museum reading room because she shad small children!) Also interesting how, until Persephone reprinted William, by Cicely Hamilton, there was only one copy of it available that she could find). As the author says, “nearly everyone has a cherished list of novels that have never been reprinted and they ‘can’t understand why.’” Beauman’s list, predictably, includes many novelists that she was later to revive with Persephone.

This is the kind of book that complements perfectly the other books on the Persephone list, and those reprinted by Virago. I was interested in what Beauman has to say specifically about the books themselves; but equally interesting is what she has to say about women’s lives in general during this time period. I think she assumes that her reader is familiar with the history of the period, but since I am, that personally didn’t bother me. The book isn’t particularly academic, though. I can’t wait to track down some of the books that Beaumen mentions in this book, since they all sound so good. 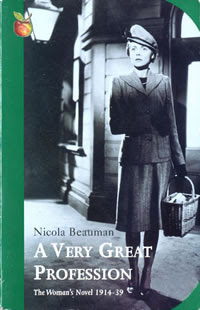 This is Persephone No. 78. Virago Modern Classics cover (which is also the Persephone bookmark that accompanies the book) above.

Karen K. said…
I started reading this a couple of months ago but then I realized there were spoilers for several Persephone books! I still want to read it but I'm going to wait until I've read more of the Persephone catalog. I hope to read them all someday.

If you like social history you might also enjoy A Woman's Place 1910-1975 which is Persephone #20. It covers some of the same topics but more general, not just relating to fiction. It also mentions books and plays which reflect the roles of women during this time period. It's a short overview and I really liked it.
March 12, 2011 at 11:42 PM

Anonymous said…
Great review! Can I recommend another novel for you? Check out my new novel Looks Like Love! I'd love to know your thoughts about it. :)

Life and Dreaming said…
Thanks for this review - I had overlooked this book when looking at the Persephone catalog and I can see now that was a mistake!
March 18, 2011 at 9:29 PM