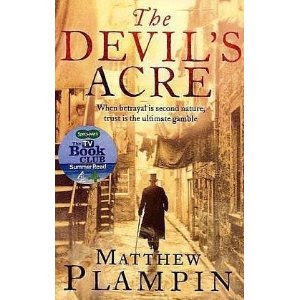 Why I decided to read: I LOVED the author’s first book

How I acquired my copy: The Poisoned Pen bookstore, Scottsdale, AZ, December 2010

Originally published in hardcover as The Gun-Maker’s Gift, The Devil’s Acre tells the story of Samuel Colt, and the factory he built in Pimlico in London in 1853. The story is told alternately from the point of view of his London secretary, Edward Lowry; a young factory worker named Caroline Knox; and her sister and brother-in-law, an Irish immigrant who plots to use Colt’s weapons for a political assassination. Meanwhile, Colt himself has his own agenda—especially with war in Europe looming on the horizon.

I really, really loved the author’s first book, The Street Philosopher, so of course I was excited to read this one. But what a huge disappointment for me! The author has a talent for describing the places and people (fictional and not) he writes about, but I felt that the plot was lacking in this one. The assassination plot fizzles out, and there were several other plot strands that went nowhere. The book drags a bit in the middle, too.

There’s also next to no chemistry between Edward and Caroline. The author describes Victorian London well, and I thought his depiction of Samuel Colt was especially good, but I couldn’t bring myself to care much about any of the characters. This is especially disappointing to me, as I had such high hopes for the book. With The Street Philosopher, I found myself riveted to the book, unable to put it down. Instead, with this book, I found my attention wandering at many points while reading this book. Not a fantastic book for me, but I have hopes for Matthew Plampin’s next one.