It’s been a good reading week here: I finished Still Missing, by Beth Gutcheon, last Sunday afternoon, and then I read The Circular Staircase, by Mary Roberts Rinehart. Her mysteries were bestsellers in the United States in the early 20th century, and she’s been called the American Agatha Christie. Judging from The Circular Staircase, her books are readable, but not high-quality literature—probably why they were bestsellers in the first place! Afterwards I read some nonfiction: Flapper, by Joshua Zeitz (a general social history of the 1920s flapper in the United States) and How Did You Get This Number, by Sloane Crosley. I read and enjoyed her first collection of essays, I Was Told There’d Be Cake, two years ago and loved it, so I was excited to receive a copy of this from the publisher. And it more than lives up to her first book, so I enjoyed it immensely.

I’m sort of vacillating between what I want to read now: I have Bedlam: The Further Secret Adventures of Charlotte Bronte out from the library, and I’ve tried with no success to get into The Shadow Princess, by Indu Sundaresan, set in early 17th-century India around the building of the Taj Mahal. It’s an Amazon Vine book, so I’ll have to review it at some point. Not sure what I’ll say about it, though. I've had much better success with No Angel, by Penny Vincenzi, the first in the Spoils of Time series and set in the Edwardian era through the beginning of WWI. I originally bought this in 2001 when I was in England, but couldn't get into it, so returned the book. When I was in England again last fall, I decided to buy it again and try it one one time. So far, so good--it's a trashy yet fun family saga.

A while ago, while participating in Persephone Reading Week, I stumbled across the Virago Modern Classics collection, “a list dedicated to the celebration of women and to the rediscovery and reprinting of their work.” Most of these authors are from the 19th and 20th centuries. Mention of Persephone I guess invariably leads to the question, “have you read anything published by Virago?” Virago Modern Classics (there are about 500 of them in all; and Verity, who reads more in a months than I do in a year, is attempting to read them all in her blog called Verity’s Virago Venture) are known for their green covers and spine, and they’ve published everything from authors you’ve heard of (Daphne Du Maurier, Dodie Smith, Stella Gibbons, Barbara Pym) to the more obscure (at least to me)—Celia Fremlin, May Sinclair, or Charlotte Mary Yonge. The cover art of the Virago Modern Classics tends to be pretty fantastic, too. Looking at the full list, I’ve read about fifty of their books, in non-Virago editions, and there are a lot of books on the list that appear interesting. My TBR list has grown exponentially! It’s taking all of my willpower NOT to go online and buy some right now… the cover below is that of the very first VMC published, Frost in May. 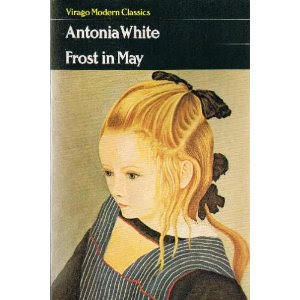 verity said…
Thanks for the mtnion! It is a fun project and I'm encountering so many different authors along the way...so do check out the history of the blog to see who has been done- I'm nearly haflway!
May 16, 2010 at 1:23 PM

Katherine said…
Wow, halfway through already? Imressive! i just spent the past fifteen minutes OK, an hour) on ebay and walked away with Frost and May and one of the Molly Keane books. i can see an addiction forming...
May 16, 2010 at 3:59 PM

verity said…
I'm afraid I'm not a Molly Keane fan, although I do have one of hers waiting to be rea.d But Frost in May was the first VMC, and absolutely wonderful book - you must read it!
May 17, 2010 at 5:26 AM