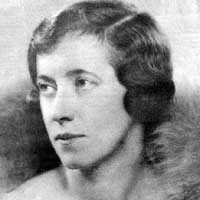 I’ve decided to take a break from my reading during Persephone Reading Week and talk about one of my favorite Persephone authors—Dorothy Whipple, whose book, They Were Sisters, I'm reading right now. I’ve only read two of her books—The Priory and Someone at a Distance, both reviewed on this site, and I’ve loved both of them.

Dorothy Whipple, the daughter of an architect and one of eight children, was born in 1893, in Blackburn, Lancashire. She became a secretary in the Education office, where she met her husband, Alfred Whipple. After her marriage in 1917, Dorothy concentrated on her writing career; her first novel, Young Anne, was published by Jonathan Cape in 1927, though she'd had stories published before this. Whipple died in 1966 in Blackburn.

Whipple is far and away one of Persephone’s most popular authors; they’ve reprinted Someone at a Distance (in 1999), They Knew Mr. Knight (2000), The Priory (2003), They Were Sisters (2005), The Closed Door and Other Stories (2007), and High Wages (2009). In all, Whipple published over a dozen books between 1927 and the 1960s—novels, short stories, and autobiographies. She was one of the most popular authors of the 1930s and ‘40s; but her writing became unfashionable in the 1950s and her last book, Someone at a Distance, didn’t sell well. Two of Whipple’s novels, They Knew Mr. Knight and They Were Sisters, have been made into films (sadly, I don't believe either is available on DVD).

As Nicola Beauman wrote, “ She may not be an amazing stylist like the New Yorker writer Mollie Panter-Downes. But her prose is understated, to the point, subtle, and intensely readable.” It’s for this reason that Whipple’s books have been reprinted-and why they’re becoming so popular with a new generation of readers.

Paperback Reader said…
We all love Dorothy Whipple this week, don't we?! I enjoyed the spotlight. I *may* read High Wages this week as it's sadly been some time since I read any wonderful Whipple.
May 5, 2010 at 7:40 AM

Joan Hunter Dunn said…
I have a Mollie Panter Downes novel waiting on my bookshelf to be read and your post has prompted me to take it down and read. Thank you
May 5, 2010 at 8:23 AM

Hannah Stoneham said…
What a lovely feature this is - I think it would be wonderful if Persephone released more "Persephone Lives" such as they did for Elizabeth Taylor.

Thank you for sharing and I do hope that you are enjoying Persephone reading week. I am on Monica Dickens' Mariana and really enjoying it.

Ana S. said…
I absolutely have to read Whipple before long. It's interesting how an author can become unfashionable only to be found by another group of passionate readers some generations later.
May 5, 2010 at 2:38 PM

anothercookiecrumbles said…
I'm still to read any Whipple, believe it or not!

Someone at a Distance appeals most as of now, but my Persephone reading material for this week has already been decided.
May 5, 2010 at 4:56 PM

Kathleen said…
Thank you for bringing my attention to this author. It is sad that she met with such popularity and then fell out of style. I'll have to read one of her novels to see what I think.
May 5, 2010 at 5:12 PM

Sue Gedge said…
I love Dorothy Whipple's wprk and have read everything of hers that I can find, both from Perspehone and from the local library stack. 'Young Anne', her first novel, still evades me--no copies to be found it seems! I see that Persephone are publishing 'Greenbanks' this autumn.
October 22, 2011 at 12:27 PM