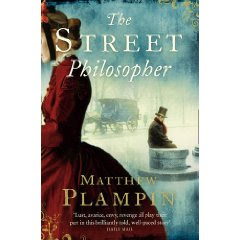 Thomas Kitson is a journalist, sent out the Crimea in 1854 to be the junior correspondent for the London Courier. The Courier team includes the senior correspondent, Richard Cracknell, a loose cannon who has an affair with the commanding officer’s wife and pens scurrilous pieces for the newspaper; and Robert Styles, a young illustrator who quickly becomes disillusioned by the war. The war, culminating with the battle of Sebastopol, is interchanged with a second story line, in Manchester two years later, when Kitson is a social commentator for a local paper (a “street philosopher”), and trying desperately to run from the past. What, exactly, happened out in the Crimea?

This is one of those “unputdownable” books. I read it nearly in one sitting, on an airplane ride back to the States after vacation. I needed a distraction from the 300-pound gorilla groping his girlfriend in the seat next to me, and this book was perfect towards that end. I was glued to this book from start to finish, reading on and on to find out what would happen next.

At first, I thought I wasn’t going to like the shifts in time—usually they don’t work so well, but here they’re done subtly. There are quite a lot of battle scenes, but the author’s descriptions of them are particularly well-done. The author clearly knows his mid-nineteenth century history, but he doesn’t overburden the reader with his knowledge, instead allowing the reader to take things in gradually. At the same time, the mid-nineteenth century, both in the Crimea and in Manchester, comes alive for the reader.

The story, too, is very well-written, and the plot unfolds gradually. There are hints of the unspeakable things that happened in the Crimea, but they aren’t revealed until much later. The plot is complicated, and sometimes leaves the reader with more questions than answers, but not overly so. It looks as though rights for this book haven’t sold in the US (at least not yet), which is a shame, because this is a truly entertaining novel. For more, click here.

Kathleen said…
I love historical fiction and this sounds like a good one. I'm not familiar with Crimea so it would be nice to learn something new!
September 26, 2009 at 2:07 PM

Unknown said…
Awww i keep walking past this at the bookstore, not sure about it - but after hearing that you enjoyed it so much I am totally going to get it now!!

I havent read much about the crimean era either, but I think the Rose of Sebastopol was set in that one - have you read it? I enjoyed that one.
September 26, 2009 at 5:54 PM

Anonymous said…
Intriguing! The Eyre Affair's version of the Crimean War has always interested me, but I guess I ought to read about the actual thing! Sounds quite interesting. I hope the rights to this get sold in America soon.
September 30, 2009 at 8:07 AM

Anonymous said…
If diamonds are a girl’s best friend then jewelry sabo schmuck
is her soul sister! Jewelry is such a powerful accessory thomas sabo charm
that many choose one fabulous piece and thomas sabo onlineshop
build an outfit around it. thomas sabo glaube liebe hoffnung
You can ruin a perfectly great outfit by wearing thomas sabo online shop deutschland
the wrong jewelry.Before we get into what and how to where jewelry thomas sabo armbänder
there are some no-nos that you should be aware of. schmuck thomas sabo
Relax – these are too tough to follow!Don’t overdo it with thomas sabo shop
jewelry. Keep it simple. Wear no more than one big piece schmuck thomas sabo ketten
such as earrings or necklace.Don’t wear an ankle bracelet thomas sabo ohrschmuck
or toe ring with a dressy outfit.
August 23, 2010 at 9:13 PM