Review: Madonna of the Almonds, by Marina Fiorato 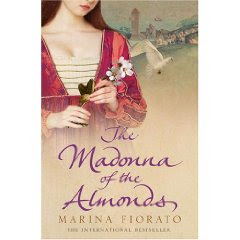 I loved The Glassblower of Murano, so I had high hopes for Madonna of the Almonds. However, I was really, really disappointed by Marina Fiorato’s second novel.

Simonetta di Saronna is a widow, her husband killed in the Italian wars of the early 16th century. Bernadino is a painter who once apprenticed under Leonardo Da Vinci, and a ladies’ man to boot. When Bernardino is commissioned to paint the chapel of Saronna’s chapel, he meets Simonetta. Later, Siomoetta invents a drink that will become famous the world over.

I liked the premise of the novel, but unfortunately, most of the story relies on circumstance. Also, the plot was predictable; I could see the ending coming from a mile away, and I’m not even all that good at predicting what will happen in novels. This book promised passion, but I really got no sense of that while reading this novel. Neither was there any kind of romantic tension between the two main characters. All the characters were wooden and unrealistic; I found it hard to believe that Simonetta would openly accept, without question, someone like Manodorata.

This all might be excusable, if the book had been well written; instead, the prose reads like it was written by someone whose first language isn’t English. In fact, sometimes Fiorato’s turns of phrases became downright weird, using, for example, the double negative on a few occasions. I’m not quite sure what happened here, considering that The Glassblower of Murano was so fantastic. I just wish that Madonna of the Almonds had lived up to its potential.

Kristen M. said…
What a shame. I'm reading The Glassblower of Murano right now and really enjoying both the writing and the story.
May 18, 2009 at 1:20 PM