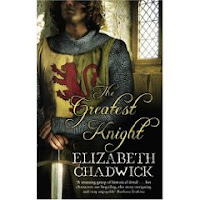 I got this from Dani at A Work in Progress. The rules are: pass it one to five bloggers, and tell them to open up the nearest book to page 56. Write out the fifth sentence on that page, and also the next two to five sentences. The CLOSEST book, not your favorite or most intellectual.

So here’s my answer. Since the fifth sentence on page 56 is dialogue, I’m going to skip down a bit.

Later in the evening there was singing and dancing and as the candles burned down, they were replaced by new ones. The Queen had no intention of retiring early and seemed determined to prove that although she was a decade older than her husband, her energy was more than a match for his. She flirted with the men both young and old, but was careful never to step outside the boundaries of propriety, sharing her favors in equal measure, never lingering with a particular man unless he was old enough to be her grandfather. Twice she danced with William and her hand, cool at first touch but warm beneath, pressed to his damp one as she moved lightly to left and right.

That particular paragraph is from Elizabeth Chadwick’s The Greatest Knight, the book I’m currently reading. The Queen described is Eleanor of Aquitaine, and William is Will Marshal, who later became head knight under her son, Henry the Young King.