Review: Murder on the Eiffel Tower, by Claude Izner 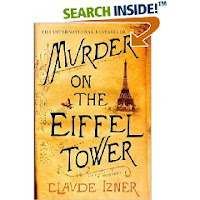 Its 1889, and people from all over the world have come to Paris for the Exposition commemorating the centenary of the fall of the Bastille. One day, on top of the newly constructed Eiffel Tower, a woman dies, apparently of a bee sting. Later, an American naturalist dies, apparently of the same cause. There’s no evidence to prove that these deaths are murder, but Victor Legris, a bookseller, sets out to solve the crime.

“Claude Izner” is the pen name of two sisters who are booksellers in Paris, so the atmosphere they evoke in this mystery is pretty authentic and detailed. I have a weakness for historical mysteries, so this book was right up my alley in that respect.

However, I couldn’t get past the characters themselves. They all seem so stereotypical: the loser-ish detective, the mysterious coworker, the red-haired femme fatale. There’s not much here that’s original. Victor was also really dense at times when it came to obvious clues. In order for me to want to continue reading a series, I have to want to continue reading about the characters. Murder on the Eiffel Tower did not leave me with that feeling, so it’s doubtful that I’ll read further books in this series.

Also reviewed by: A Work in Progress

Serena said…
I hate when all the characters are sterotypes. It's ok to have one or two stereotype characters, but all of them gets to be too much.

I think I'll skip this one.

Iliana said…
Oh no, I hate it when a mystery sounds good but doesn't quite live up to the expectations. I may just check it out because of the setting and the fact that the sleuth is a bookseller but might not be rushing out to get it ;)
September 15, 2008 at 6:18 PM