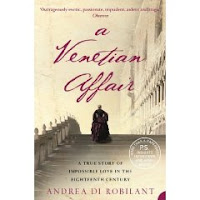 This is a captivating love story, one that shouldn't be missed. Andrea Di Robilant weaves a superb tale of his ancestor, based upon the letters passed between the two lovers. What seemed amazing to me was that the letters remained for years and years in the library of Randolph-Macon College. (I was also surprised to learn that, incidentally, the author's mother went to the same college I went to, no big feat since it is relatively unknown).

It is the story of the illicit love affair between Andrea and Giustiniana, which began in 1754. Banned from seeing one another, they must communicate surreptitiously, stealing embraces and kisses whenever they can. They must hide especially from the eagle eyes of Giustiniana's Greek- English mother, Anna, who won't allow her daughter to marry a member of the Venetian aristocracy. Di Robilant also puts in excerpts from the two lovers' letters, giving the reader a sense of proximity to this book, which reads more like a novel than a straightforward book on history. The use of masks in 18th century culture is indicative of the way in which Andrea and Giustiniana must conduct their affair.

Its a beautifully written story, one of passion, jealousy, and, especially, love. I was enchanted by the language Di Robilant used to bring this story to life on the page, and by the masterful way in which he carried it out. Di Robilant catches the air of mid-18th century Venice perfectly: the salons, the balls, and the intrigues. It will keep you reading from stormy, sudden beginning to stormy, sudden ending.

Anonymous said…
Yes! I am putting this on my wishlist! I keep reading 'eh' books about Venice, and I've been looking for one that is actually good.
August 15, 2008 at 10:59 AM

Heather J. @ TLC Book Tours said…
Oh dear! I have to disagree with you on this one (and we usually have VERY similar opinions too). I listened to the audio version and I was really bored by it. Yes it was fascinating, yes I really WANTED to love it, but alas ...

I think it was really the ending (or lack thereof?) that did me in. I won't give any spoilers for those who haven't read it, but I was quite disappointed in this one.

Anna said…
This sounds like a great book! I think I'll have to check it out. Thanks for the review!