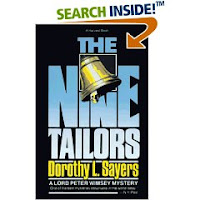 On New Year’s Eve, Lord Peter Wimsey is driving through the East Anglia countryside, when a flat tire causes him to stop in a local village. The village bell ringers are about to perform, and Wimsey fills in for one of the ringers who can come down with the flu. The nine tailors of the title are the nine bells that are rung upon someone’s death; you can tell that Sayers did her research on bell ringing for this book, since most of the beginning of the novel focuses on campanology.

When a local man dies several months later, and his grave is dug, it’s discovered that there’s already a dead body in that grave—the body of an unknown man who was seen tramping about the countryside in January by Lord Peter himself. Who is the strange man?

It’s a mystery that stumps even Lord Peter, and it’s pretty ingenious—read it and see for yourself. Dorothy Sayers’s novels are such a treat because she really knew how to pull a mystery together—she won’t kill off one of her characters simply because she can. There’s a backstory to everything, and Sayers leaves no stone unturned in this book. The Nine Tailors is as perfect a murder mystery as you’re going to get.

Nan said…
Great review! I love this book, too. I think it has a darker feel than some of her others. But oh, so good. Have you ever watched any of the old PBS shows with Ian Carmichael as Lord Peter? They are available at Netflix, I think. The version of this book was especially good. I need to read The Nine Tailors and all her others again. Such a great writer.
August 24, 2008 at 11:22 AM

Anonymous said…
Dorothy Sayers is fantastic! I don't know if I've read this one -- I'll admit, they tend to blur together in my mind somewhat -- but I'm a definite fan. Of course, we know that Gaudy Night is the best of the lot :)

On another note, I noticed that you've got an out-of-date link for me on your blogroll. Would you mind changing shereadsbooks.wordpress.com to shereadsbooks.org? I just recently started blogging at my own domain -- now I'm trying to get the word out for such updates. Thanks!
August 24, 2008 at 5:07 PM

Katherine said…
Unfortunately, I haven't ready Gaudy Night! Will have to do so as soon as possible, though I'm taking my time with the Lord Peter Wimsey series, since there are so few of them. Shereadsbooks: I'll definitely change the link right now.
August 24, 2008 at 7:00 PM

Carl V. Anderson said…
It is indeed perfect. I listened to an unabridged BBC performance on audio many, many moons ago and I was so entranced by the story. It was so delicious to experience that way.
August 26, 2008 at 7:28 PM