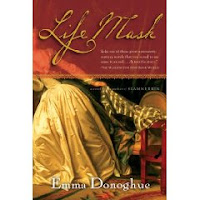 Emma Donoghue has an amazing talent for portraying the lives of women. From lesbians to 18th- century murderers and actresses, Donoghue captures the imagination of her readers with her vivid prose and insightful, intelligent comments about society. The women she puts on paper are enchanting; their lives (fact or fiction) become real when Donoghue puts them to paper. Her sense of history is dead-on accurate, leading the reader to feel as if he or she has been catapulted unexpectedly into the world of 18th- century England.

Life Mask is the story of three famous Londoners in 1787: Anne Damer, the most famous female sculptor of the time; the Earl of Derby; and Eliza Farren, actress. The three, along with friends, meet together often to put on plays at the Earl of Rochester's mansion, Strawberry Hill. The tale follows these three protagonists as they move through London Bon Ton, or High Society.

As in Slammerkin, Donoghue is intensely conscious of the fashion of the time; but here, as well, she becomes more and more involved with the politics of the day. England had just lost its major colony in a crippling, economy-damaging war, and the political situation was rife with unrest. Everyone, it seems, wears a mask, and not just onstage: Eliza Farren and Derby, as they struggle with their six-year love affair are only just a part of this magnificent novel. This is a powerful political and romantic intrigue, fraught with tension and excitement.

Anonymous said…
I'm on the look out of this book. Thanks for the thoughtful review. Donoghue's thorough research and attention to historical details make her books very engrossing to read.
August 15, 2008 at 7:20 PM

Teddy Rose said…
Another great review Katherine! I added it to my TBR. I read The Sealed Letter this spring and quite liked it.
August 16, 2008 at 1:08 AM