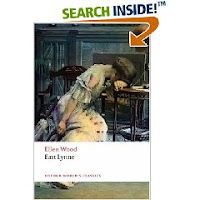 If Danielle Steele had lived in the 1860s, East Lynne is probably the type of novel she would have written. Murder, disguise, adultery, divorce, illigitmate children—and oh, yeah, a horde of bats—are at the center of this sensationalist novel that was in and of itself a reflection of the time period in which it was written.

When William Vane, Earl of Mount Severn, dies, destroyed by debt, his daughter, the Lady Isabel, marries a country solicitor, Archibald Carlyle. Later, she abandons her husband and children in favor of a well-known rake, Francis Levison. When he abandons her with her illigitimate child, Lady Isabel becomes, in an ironic twist of fate, governess at East Lynne.

It’s a pretty far-fetched book, all things considering, and the foreshadowing is laid on pretty thick. In one scene, a horde of bats appears at East Lynne one night; next thing you know, the Lady Isabel’s father is dead. The novel is full of people “screaming,” “crying,” “sobbing,” and “raving,” instead of simply “saying” things. It’s pretty much all the melodrama you could ask for, and more.

Ellen Wood wasn’t, by any stretch of the imagination, a good writer—at one point, when Francis Levison sneaks around in the bushes listening in on a conversation between Barbara Hare and Mr. Carlyle, the author describes him as “strolling down like a serpent behind the hedge.” Oh, if only serpents could stroll! There are also minor inconsistences; for example, when Mr. Carlyle marries a second time, his sister moves back to her old home; but later, the author tells her reader that Miss Carlyle vacated her room upstairs in favor of one downstairs. It’s a book that’s passed out of the canon because it’s so quaint and dated. But it seems as though Ellen Wood sure knew how to titillate her Victorian readers.

Serena said…
Hello there! I hope your summer is well. I tagged you here: