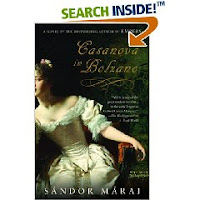 Venice, the 18th century: The days when Venice controlled trade by the sea are long over, and the city has descended into decadence. Carnivale, the annual event celebrated by Venetians, lasts half the year; the elite of Venetian society gamble and drink behind the anonymity of masks. In 1756, Venice was home to the infamous Casanova, a rake who lived the high life to the hilt. Born in obscurity, Casanova managed to befriend a duke and move himself through the ranks of Venetian society. Although not by accounts a physically attractive man, he captivated all kinds of women with his charm and flair.

With a kind of poetical language which is all his own, Sandor Marai wrote this practically perfect novel which attempts to recreate the period immediately following Casanova's escape from a Venetian prison, in which he hid out in a room in the ton of Bolzano on the mainland. A surprisingly passionate man, one tiny event or word from someone brings on a torrent of passionate words from the famous aristocrat, who is startlingly violent in his actions. After sixteen months in prison, Casanova is ready to enjoy the finer things of life, but finds that he has lost his touch. Marai, who wrote Casanova in Bolzano in the 1940's, gives a warm, sensual depth to descriptions as well as a finely-tuned insight into the subject of his narrative.

Going back and forth in time, Marai mixes the present with past memory, and reality with that which can't be touched. He recreates the day when Casanova fought in a duel with the Duke of Parma, five years before over a country girl, a woman he might have been in love with.

The paragraphs in this book are long, and there is quite a lot to take in; but this book is certainly worth the read.

Veronica said…
seriously, you are killing with the amount of books you review that i immediately need to add to my TBR pile.
August 27, 2008 at 12:19 PM

Anonymous said…
Yea! Another great book taking place in Venice! How wonderful! BTW, I tagged you in a meme. I hope that you will have as much fun with this as I did!
August 27, 2008 at 4:36 PM

Danielle said…
This is another book I've been meaning to get to--I have another one of his books as well and he has come highly recommended by another friend also. I'm glad to hear he's as good as he sounds.
August 29, 2008 at 6:42 PM