Review: The Best of Everything, by Rona Jaffe 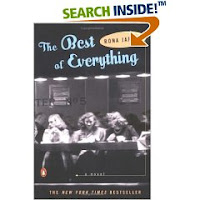 The Best of Everything is a pretty intriguing novel. Set in New York City in the 1950s, the story focuses on five career women: Caroline, the Radcliffe graduate who still lives with her parents; April, the naive girl from Colorado; Gregg, the actress; Barbara, the single mom, and Mary Agnes, the young woman who anticipates her wedding. There’s also Miss Fawcett, an editor who’s sort of a Miranda-Priestly-in-training. They all work at Fabian Publishing while dreaming of something bigger and better.

Jaffe intended her book to be a kind of cautionary tale, but oddly enough, it’s had the opposite effect on young women everywhere; many decide to go into publishing or to work in New York because of this book. Like many other first novels, Jaffe’s book is largely autobiographical; she too went to Radcliffe and worked for a while in publishing as a file clerk and then as an editor. One wonders if Jaffe's romantic relationships were anything like the relationships in the novel.

Though the publishing industry had changed significantly in the fifty years since The Best of Everything was published, in many ways this book is still highly relevant today. At one point, one of the characters says, with regards to the women who work in the typing pool (also known as “the bullpen”) in publishing, “They’re all college girls with good educational backgrounds and no experience and they’re willing to work for practically nothing. That’s why Fabian can pay so little and get away with it.” The same thing can be said for the publishing industry today. It’s really a timeless book, much more so than Jacqueline Suzann’s Valley of the Dolls (which is similar to The Best of Everything in a lot of ways). For the time in which this novel was published, Jaffe was pretty open and candid about things such as abortion and sexual harassment. In all, this is the rare kind of novel where you really care about the characters, long after you've put the book down.

Anna said…
I read Jaffe's "The Road Taken" and absolutely loved it. I think I'll have to check this one out, too. Great review!

Anonymous said…
Thank you for a thoughtful review. Women in the publishing industry is an intriguing topic. I'll put this one on my list.
August 27, 2008 at 11:31 PM

Joanna said…
If the book is just as interesting--or even more so--than the film, then I'm in for a rare treat! Must put this on my "to read" list.

I work in publishing and I have to agree with Rona's remark. People certainly don't get into publishing for the money. I can't speak for everyone, but most people I know who are in the same field were English majors in college and adore reading and words and like to be surrounded by creative, interesting people. There are so many of us out there, all clamoring for the same positions that the publishing companies can afford to pay their employees nothing! It's kinda sad, if you think about it!
August 28, 2008 at 9:45 PM

Danielle said…
I've had this one for a while and keep meaning to read it--I remember The Valley of the Dolls being a bit dated, so I'm curious about this one.
August 29, 2008 at 6:40 PM