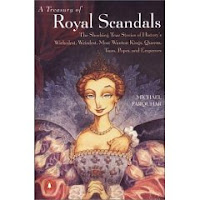 If you ever found yourself wishing that People magazine contained less of Britney and more of Henry VIII, then this book is for you. A Treasury of Royal Scandals: The Shocking True Stories of History's Wickedest, Weirdest, and Most Wanton Kings, Queens, Tsars, Popes, and Emperors is a compendium of all the deliciously, scandalously bad things kings, queens, emperors, and popes have done over the past two thousand years or so. Covering adultery to alcoholism, torture, murder, and beyond, it turns out that the ruling classes of Europe, especially in France, England, the Holy Roman Empire, the Roman Empire, and Russia, were quite badly behaved at times. We're given, in short form, everything from Richard III to the Babylonian Captivity, to Emperor Nero (even if he didn't fiddle while Rome burned), to Mad King George III.

Farquhar provides the reader with several family trees and appendices, which include timelines and the various royal houses. The writing style is witty and lively, and I was very much caught up in the various stories, which tend to be told in short chapters.

However, I didn't like the way the book was laid out--there didn't seem to be any kind of coherent organization (ie, chronological or geographical) to it. As someone who gets a bit of a voyeuristic thrill out of this kind of thing, I was delighted with this compendium. Because the book was written by a journalist, A Treasury of Royal Scandals isn't, perhaps, the most scholarly work of nonfiction (and some of the incidents and tidbits seem as though they're merely gossip). But it sure is fun.