Review--Speaks the Nightbird, by Robert McCammon 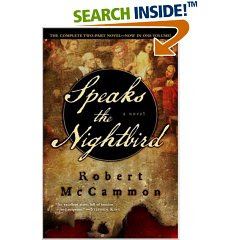 It is 1699, and a magistrate from Charles Town and his clerk come to the town of Fount Royal to oversee the trial of a young woman accused of witchcraft. Matthew Corbett, although only twenty, has a clever and inquisitive mind, and he begins to suspect that Rachel Howarth is not as the townspeople make her out to be. The town of Fount Royal is populated with characters that would make the citizens of Peyton Place envious; it seems that everyone has something to hide, and that they would commit murder to keep those secrets hidden. Even Woodward, the magistrate who is Matthew's mentor, is secretive about his past.

While I thought the author was a little bit crude in some places, I really liked how the story ultimately unraveled itself, from the encounter at the beginning with a murderous innkeeper until the denouement, which caught me by surprise (and I've read enough mysteries to be adept at figuring out "whodunit" part way through). The story is a mixture of horror and mystery, and McCammon is adept at putting the two together seamlessly.

I first found out about Speaks the Nightbird through the sequel, The Queen of Bedlam; that book is sitting on my nightstand just begging to be read.