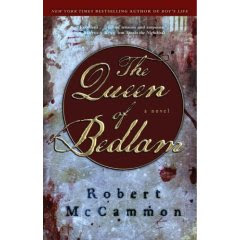 The Queen of Bedlam is an intriguing, thoughtful novel about the underworld of New York in the early eighteenth century. Matthew Corbett, the magistrate’s clerk to whom we were introduced in Speaks the Nightbird, returns, this time to solve the murders of three of New York’s citizens: a wealthy business owner, an orphanage owner who Matthew was acquainted with in a previous life, and a doctor. It turns out that the murders are just the simplest link in a series of mysteries and crimes that began years ago in England; one of the mysteries include a mute woman in an asylum whose identity is unknown, but simply called the Queen of Bedlam.

The character of Matthew has been strengthened in this novel. The reader definitely got to see more of what made him tick, though I think Matthew got over his anger at Eben Ausley a little too quickly. At times Matthew has a wicked sense of humor, and it definitely came out more in The Queen of Bedlam. I was interested in McCammon’s descriptions of early New York; with a population of 5,000 citizens, New York in 1702 was promising to become the densely populated city it has become.

The plot of the novel itself moves at a breathtaking pace, and although the book is over 600 pages long, it definitely passes by quickly. That’s not to say that this book is an easy read; rather, there are complicated levels to it. While certainly not Literature in the broader sense, I was hooked from the first sentence to the very last. Although The Queen of Bedlam works fine as a stand-alone novel, I strongly suggest you read Speaks the Nightbird first; sometimes mention of things that happened in the first novel is made in the second.