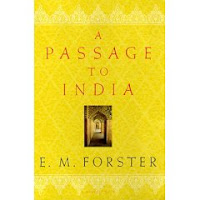 A throwback to the classics!
I recently finished reading A Passage to India, by EM Forster. Actually, I re-read it; the first time I read the book was in college. But it’s a fairly dense novel (despite being only 362 pages), so a second read was definitely worth it. It’s a complicated novel about British imperialism in India in the 1920s, and about the relationship between the natives and the British as those two cultures collide.
The story revolves around several characters: Adela Quested, a young woman come to India to marry a government official; her potential future mother-in-law, Mrs. Moore; Dr. Aziz, a local doctor who becomes friends with these ladies, until something shocking happens one day on an outing that changes things forever; and Cecil Fielding, another member of the expatriate community.
In some respects, A Passage to India hasn’t aged all that well. I also found my attention wandering in some places. But still, it’s a well-written novel about what happens when East meets West.
Also reviewed by: My Own Little Reading Room, Teddy Rose, and Random Field Notes