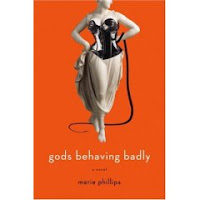 The ancient Greek gods, while immortal, had very human characteristics, so its no wonder that they've managed to survive well into the twenty-first century. Since 1665, the gods have been living (just barely) in a dilapidated house in London and have taken up modern-day jobs. Times have changed, but the gods haven't—Dionysius is still drunk, Ares is still plotting war, and Demeter is still tending to the plants in the garden. Artemis, who is now a dog-walker, is the character on whom the novel focuses the most (she’s also one of the more straightforward of the gods).

The book opens with a fight between Apollo (a TV psychic) and Aphrodite (a phone sex operator), which escalates when the latter enacts revenge on her nephew. One day, as Apollo is in the middle of a broadcast, Eros causes him to fall violently in love with Alice Mulholland, a house cleaner who happens to be in the audience that day.

What ensues is a wonderfully comic (albeit dark) tale of love and sex in modern-day society. Some readers might be affronted by the in-your-face sexuality of the book, but you have to remember that the Greek gods were extremely sexual beings. And you don't have to have an in-depth knowledge of Greek mythology to understand the book (sometimes it's explained for the reader). The idea for Gods Behaving Badly is ingenious, and it's carried through perfectly. Marie Phillips’s writing style is lighthearted, fun, and engaging, and keeps you interested the whole way through this short novel.

Also—how can you not love the cover? A classical Greek statue wearing a bustier… awesome.
Also reviewed by: Tiny Reading Room, Becky's Book Reviews, An Adventure in Reading, The Literary Word, Savvy Verse and Wit, Tanzanite's Shelf, As Usual, I Need More Bookshelves

The Dissident Daughter said…
this looks great. I'll have to pick it up next time I'm at a bookstore.
I think you make great recommendations. Hope all is well with you!
March 17, 2008 at 4:12 PM