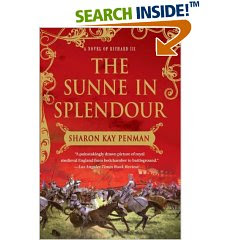 The Sunne in Splendour tells the complicated story of Richard III, the last of the Plantagenet Kings. Younger brother of Edward IV, Richard would never have become king if not for a series of political maneuverings on his part. History (and Shakespeare) have made Richard out to be an evil, greedy hunchback; Sharon Kay Penman tells the story of a man who was fiercely loyal to the people he loved and who was reluctant to take the throne. Richard had his faults, to be sure; but in this novel, he comes off as extremely sympathetic.

Penman has a writing style that literally had me hooked from the first sentence. A trite cliché, I know, but I was definitely drawn in from the first page. I knew in advance of reading the story what the outcome would be, but still I kept on reading to see what would happen. The novel is fiction based on fact that sometimes seems like fiction.

The characters are well drawn; and while the book is ostensibly about Richard, we get to see the story as seen through the eyes of others, which I thought was well done. Penman has a knack of really getting into her characters, no matter what the time period or where they come from, which is nothing short of genius. The author even gives a thoroughly believable explanation for Richard’s behavior with regard to his nephews, the Princes in the Tower, which was quite satisfying. And although the book is over 900 pages long, it only took me about a week to read; I was disappointed when I reached the last page. I can’t believe that, with my interest in historical fiction, it’s taken me this long to discover Sharon Kay Penman’s works; I can’t wait to read more by her.
Also reviewed by: Between the Covers, Devourer of Books