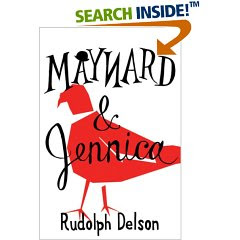 Maynard and Jennica is the story of Maynard Gogarty, a man in his late thirties who makes documentaries, and Jennica Green, a twenty-something woman from California who says "like" a lot. They meet by chance one swelteringly hot August morning on a New York City suway train, and later enter into a relationship. The story has multiple narrators, including dead people, animals, and inanimate objects. It isn't difficult to tell which voice is which, though, which makes for a highly enjoyable read.

The first part of the book takes place during the summer of 2000 and the winter of 2001. The second half of the book takes a completely different turn when the treagedy of 9/11 occurs, and while it has a major effect on the rest of the United States, it has a subtle effect on Maynard and Jennica's relationship. It's fun because my neighborhood is mentioned in the novel. And Delson doesn't drag down the plot in the second half of the book with too much wistful thinking or "big thoughts" about 9/11.

In short, although the plot seems to drag in places and the coincidences are a little too, well, coincidental, Maynard and Jennica is a quirky, creative, not to mention funny, novel about relationships in modern-day New York City.