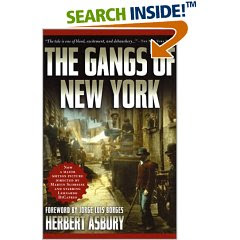 The Gangs of New York is an introduction to the gangs which proliferated in New York, primarily in the notorious Five Points district on the Lower East Side, in the nineteenth century. We're introduced to a number of famous characters, from the mythological Mose with his superhuman strength, to Bill the Butcher, to the Whyo gang, to the tong wars of Chinatown, and to the Monk Eastman gang and Big Jack Zelig.

Although the book is introduced as a work of sociology, it's more a book of popular and cultural history. Many of the tales Asbury tells on this book are based on rumor and myth and often it's not quite clear what's factual. Also, the language itself is a little old-fashioned, and Asbury is blatantly racist at times (take this sentence, for example: "[The Bloody Angle in Doyers Street, in Chinatown] was, and is, an ideal place for ambush; the turn is very abrupt, and not even a slant-eyed Chinaman can see around a corner." (p. 286)). The Gangs of New York is also dated in that the author will say something like, "such-and-such is located at such-and-such address, where now there's a such-and-such." The New York City that Asbury wrote about was obviously much different from what it is now.

But this volume is nonetheless an excellent introduction to the gangs of New York City in the nineteenth and early twentieth centuries. You don't even have to know too much about the city's history in order to enjoy the book. I've always been fascinated with deviant behavior in history, and for that alone I thought highly of The Gangs of New York.

Anonymous said…
Thanks for reviewing this book! I really tried to read it (in the German translation, because I couldn't get the original version at the time), because of the movie with Leonardo. But I found this piece of writing almost unreadable (at least for me). It doesn't even tell a real story; it doesn't really focus on the social problems back then (which would be fine with me, and I enjoyed reading that part). In large parts, it's only a listing of names and events related to them...and you're absolutely right - there's no way to know the truth from the myth. I read it half through, and then I gave up and will probably never return to it.
It completely evades me how this book could inspire someone in any way...lol. But then, I'm not a filmmaker, and I don't live in NYC *smiles*
May 20, 2008 at 3:45 PM