Book review: Women of the Raj, by Margaret Macmillan 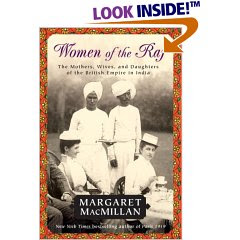 Women of the Raj is a fascinating portrait of two cultures in collision: that of the Indians, and that of the British, who occupied India in the eighteenth, nineteenth, and twentieth centuries. More specifically, this book is about the British women who populated the Raj, from the time they arrived in India until the time they left in 1947. The book explores how women thought, what they ate and wore, and how they interacted with one another. It's a study of history that gets overlooked in favor of more "important" things, and which I'm glad was covered in this book. The book draws on letters and nonfiction and fiction books by a variety of authors from three centuries.

What I thought was fascinating was the British attitude towards the people they governed, and the attitude the Indians had towards their rulers. The caste system was complicated, something that the British didn't understand and never evne tried to understand most of the time. I love how the author brings the lives of the women of the Raj to the forefront of Anglo-Indian history.

The British women who lived in India tried to balance the best of two worlds: being a traditional housewife while surviving the climate and culture of India. I thought it was fascinating how the women tried to re-create English society in their adopted homes, right down to social etiquette and the food they ate. Many of the women hated living in India, but many more enjoyed their stays in a country that was completely foreign to them in every way. In all, I great study of Anglo-Indian history, though I would have liked MacMillan to have talked more about the women who fell outside the traditional role of "memsahib," or the other traditional housewives of the time. But a must read for anyone who likes Indian history, or Victorian history, or the history of women.