Book Review: The Meaning of Night, by Michael Cox 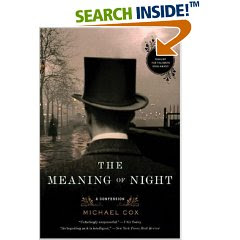 The Meaning of Night: A Confession is the story of Edward, whose last name varies between Glyver and Glapthorn at different points in the story. In childhood a great wrong is visited upon him by Phoebus Daunt, and Edward spends the rest of his life figuring out how to enact revenge on his wily enemy. The plot thickens when Edward then learns that he is the son of Lord Tansor and therefore heir to the great Evenwood estate. Lord Tansor, who has no natural heirs of his own, is about to entail the estate to none other than Daunt.

Set in and around London in the 1840s and ‘50s, The Meaning of Night features an extremely unreliable narrator. Is Edward’s desire for revenge justified? Or are his ramblings those of a crazy person? I was hooked on to Edward’s story, and indeed even rooted for him, despite the fact that he begins his story with the killing of a man. Written in the style of Charles Dickens or Wilkie Collins, the author’s style is never dragged down by old-fashioned conventions. Despite the fact that the book is 700 pages long, the plot never drags along. This novel reminded me a lot of Susannah Clarke’s Jonathan Clarke and Mr. Norrell, and Jed Rubenfeld’s The Interpretation of Murder.
Also reviewed by: Bell Literary Reflections, Bookeywookey, Between the Covers