Review: Through a Glass Darkly, by Karleen Koen 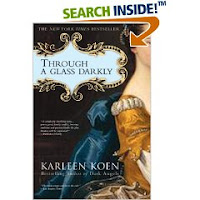 In the tradition of Kathleen Windsor's Forever Amber, Karleen Koen gives us the story of Barbara Montgeoffrey, a young woman who matures as she ages. The story begins when she is fifteen and marries Roger, a man much, much older than herself but whom she is determined to marry nonetheless. Barbara, like her counterpart in Forever Amber, is headstrong and willful, but I think Barbara is more likeable as a character. The cast of characters is fantastic: Barbara's grandmother, the aging Duchess of Tamworth; Barbara's mother, the spoiled and selfish woman who tries to get a divorce from her husband; Barbara's cousin Tony, a shy boy who grows into a very capable young adult and who remains in love with her even after all that she goes through; Barbara's husband Roger, a man who is not as bad as we think he is; Philippe, Roger's on and off again "friend;" Therese, Barbara's French lady's maid, who becomes an invauable companion; and Hyacinthe, a boy originally bought to serve as Barbara's slave, but who becomes like a son to her. There are also Harry and Charlotte, two pugs who are almost people themselves.
The book is divided into two parts, beginning with Diana's decision to marry her daughter to Roger Montgeoffrey, a bachelor who is notorious but also incredibly wealthy and well-connected at both the English and French courts. Barbara, completely in love with him, gets her wish and they marry, but not without the forebodings of the Duchess, the old woman who has cared for Barbara since she was a small child. They go to France, where Barbara is pursued by many men and Roger finds himself becoming jealous over them. The first part ends with a bang. It is then that Barbara learns about the true nature of the relationship between her husband and the Frenchman Philippe. It is also at this point that Barbara loses her innocence and steps into adulthood. She and her husband separate for a period of four years, not to be reconciled until almost the last moment.
The second part opens four years later. It opens with another bang: the popping of the South Sea Bubble, a crisis that had deleterious effects on not only England, but its colonies as well. By this point Barbara has become notorious fer her bavior: sleeping with several different young men, causing them to duel, and getting sent away from the Hanoverian court. There's a reconciliation with Roger, but it comes much later than the reader would have liked. This was a wonderful book; filled with insightful research and storytelling, I couldn't put it down. I highly recommend this book to anyone who likes historical fiction and romances--but not the cheesy kind.
Also reviewed by: Jackets and Covers

Lisa said…
I read this in high school and had a love/hate relationship with it. Parts of it were so shocking to me but I was fascinated. I occasionally think I should read it again to see how it fares 15 years later.
May 22, 2008 at 12:15 PM